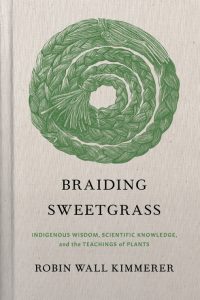 I have seen many reviews of this book that talk about the Native American traditions author Robin Wall Kimmerer writes about. Others focus on the science and the ecology that permeates the book. The environmental defense/support/activism are also key motifs in the book. All of those are true and fair. Kimmerer is a member of the Citizen Potawatomi Nation. She is a scientist and professor of Environmental Biology and the founder/director of the Center for Native Peoples and the Environment. Few if any are as equipped to blend science, environmentalism, and Native American traditions into an extraordinary book.

Presumptuous as this may be, the subjects mentioned above are not what I gleaned from Braiding Sweetgrass. I believe this is first and foremost a book about relationships, particularly our relationship to the environment. Other relationships also come into the book: mother and daughter, person to community, citizen to nation, Indigenous People to majority population. But from beginning to end, Kimmerer is championing, pleading, calling, cajoling, demanding a change in the way we interact with our environment.

Kimmerer writes about Native American traditions in a hauntingly beautiful and mournful voice. She speaks only a little of her heritage language. Fewer than 10 people alive speak it fluently, and they are all quite elderly. Kimmerer’s grandfather was one of the literally thousands of children who were taken from their homes and sent to “Indian Schools.” He was sent to Carlisle, PA, a small city near Harrisburg. There the children were forbidden from speaking their language, worshiping their gods, expressing their culture, wearing traditional clothes, or in any other way diverging from the path of their white teachers. By the time he graduated, he had lost most of the culture of his childhood. Of course, his skin had not changed color, so he was essentially a man without a people: no longer culturally part of his tribe, never physically accepted into white society. His story can be told a thousand times over, from tribes across the nation and other indigenous people from around the world.

The author mourns the loss of her culture and has done what she can to recapture it. She has learned some of their stories. She has embraced some of their philosophy. She has taken language classes from one of the elders. She certainly does not reject modern culture out of hand. She is a scientist. Her language class is conducted via Zoom. Kimmerer seeks to restore what she can, acknowledging that much of it is lost forever.

Key to this book and to the syncretistic environmental philosophy she espouses is a change in our relationship to the environment and to each other. What particularly stood out to me was a challenge to move from a philosophy of greed to a philosophy of gratitude. If the earth is to be conquered and exploited then we have set ourselves as separate and apart from our environment, indeed, from our planet. This mindset is pervasive in our western culture, and has led directly to the pollution, climate change, deforestation, strip mining, and other ills that threaten our very existence. If instead we see ourselves as part of the earth, grateful for its constant support and embrace, we work to express our gratitude to the environment. We don’t engage in destructive practices that level an entire forest or poison air and water. We choose to accept what is freely given, taking only what we need and leaving the rest. We recognize that our acts have consequences beyond ourselves. We recognize that we are part of a community that goes far beyond our home and includes people around the world, includes the plants and animals that live around us, includes the soil and the air and the natural bounty of our earth.

Braiding Sweetgrass is a very different sort of book from an author with a unique perspective. I believe, I hope, that I am a different person after reading it than I was before.