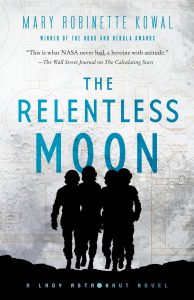 When we left Elma York at the end of The Fated Sky, she and a team of scientists and colonists were on their way to Mars. For the most part, The Relentless Moon leaves her and them on their journey. Instead, this novel focuses on her fellow lady astronaut, Nicole Wargin. Wargin was the astronaut who in many ways did not belong. She was primarily allowed into the space program because her husband, now Kansas Governor Kenneth Wargin, was an important political backer of the space program. She was a pilot and had served during World War II, but after the meteor struck near Washington, DC and a climate shift began that would make the earth uninhabitable for humans, the space program moved into high gear. Still, they needed some public faces for the program, and the socialite wife of a prominent politician (one who could also fly a plane) was a perfect face for the publicity.

Still, not everyone is persuaded. Some argue that the space program diverts money that should be spent trying to heal the earth. Others believe that if everyone cannot escape the earth’s fate, no one should. These “earth firsters” have begun actively attacking the space program. Rockets are failing at a much higher than usual rate. Riots are erupting in the streets of the nation’s new capital, Kansas City. Even attacks on individuals associated with the space program are becoming more violent. Some of those hit very close to the Wargins’ inner circle. All in all, it is a bit of a relief when Nicole can return to the moon where she will be safe.

Except even the moon is facing problems. Transports failing, disease outbreaks, system failures, all begin getting worse and worse. Could some earth firsters have actually infiltrated the space program and made it to the lunar base? Is the entire colony in danger?

Mary Robinette Kowal is an outstanding writer. I have loved all three of the Lady Astronaut books, and this one is extraordinary. It may be my favorite of the three (which is saying a lot). Nicole Wargin is a contradiction. She is brilliant, but never went to college. She has top secret clearance, but was part of the USO during the war. She is smooth and classy and upper crust, seemingly confident and in control at all times. But she struggles with anorexia, a battle that might cost her a place in the space program, and may put not only her life but the lives of her friends in danger. Kowal weaves issues of racism, misogyny, mental health, class distinction, and many other social issues into her alternate history of 1963. We feel the mounting tension between people who will be left on a dying earth and people who will have the means or the education or the good fortune to be part of earth’s diaspora. How do you prepare people to watch their planet burn? And to know that some people, but not them, will be chosen to escape? All of this, and a tightly knitted science fiction novel with a compelling mystery thrown in.

Easily among the best books I have read in 2021, The Relentless Moon is tense, unpredictable, and passionate. Compelling and brilliant it is an amazing piece of an amazing series.