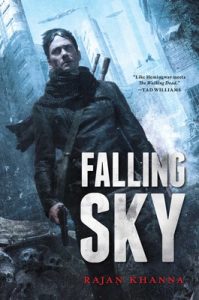 OK, yes. I picked up this book originally thinking it had some relationship to the American TV show of the same name starring Noah Wylie. Falling Sky (the book) is nothing like Falling Skies (the TV show). Despite my initial confusion, I decided to give the book a try. I’m glad I did.

Ben Gold lives in an America that makes most dystopias seem like island vacations. A disease has swept the world, turning most humans into almost animal creatures called “ferals.” Think “zombies,” and you are not completely wrong. Even the slightest exposure to fluids from a feral can infect someone and destroy every sense of humanity the person has. Most of the very few remaining humans live in airships, far above the ground that is teeming with ferals and disease. They must venture to the surface to scavenge things left from before the plague, things that can no longer be made, but those trips are fast and often deadly.

Gold has been hired to protect a group of scientists, led by Miranda. They are working on a cure for the disease. When Miranda discovers the blood of a specific feral responds differently to her experiments than that from other ferals, she determines to capture that feral. Alive. Then bring it back to study.

Gold wants no part of this and leaves the settlement. Soon thereafter, though, he hears that a group of raiders plans to attack the scientists and he races back to help. He is too late to do much, though, and even his own ship gets taken by the raiders.

The adventure goes on as Ben and Miranda travel through their broken world, encounter people who are absolutely committed to killing them and others who keep that as an option for later, ferals who are committed to eating them, and a few who are willing to hope for a better future.

This is Khanna’s debut novel but it does not read like a first book. Gold is a complex character, full of contradictions that he acknowledges to himself. He is often unlikable. He drinks too much when he can and he is fully committed only to two things: his ship and his survival. He sometimes uses people and takes advantage of opportunities even when they might–or definitely will–hurt someone else. Still, he reminisces about his late father (a victim of the plague) and finds comfort in his Jewish heritage and traditional Hebrew prayers even though he is an atheist.

The question throughout remains: if it comes down to the things Ben truly cares about versus the people that he cares about, which will he choose?

Falling Sky makes for an interesting read. It charts a different direction in the dystopian thriller genre, creates a fascinating world, and sticks an unusual character into the center of the plot. It reminded me a bit of Mira Grant’s Newsflesh series. I like that series and I like this book.