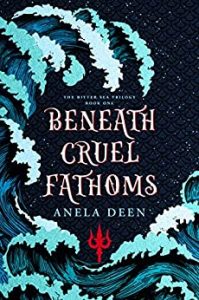 Anela Deen is good with words. And fantasy. And romance. Sometimes, being wrong is a great experience. I am richer for having read Beneath Cruel Fathoms. Deen uses a brilliant canvas of a windswept, rocky, cold “Eisland” as the setting for the perils of magic going wrong and love transcending hate.

Isaura has left the shattered pieces of her old life behind and is returning home to Eisland to live with her father and her aunt. Her husband has left her, largely because she is infertile and he desperately wanted a child. Unable to bear the shame of divorce, she is going to the place where she knows she is fully loved and accepted.

During the sea passage home, a typhoon blows up without warning. The ship is destroyed and all of the sailors are killed. Isaura survives the destruction, barely, but far from shore in a bitterly cold sea her life will soon end along with the others. When all hope seems to be lost, Isaura finds herself carried away from the wreckage and brought to another ship for rescue.

Leonel is the last surviving merman. Son of an undersea goddess-queen and a mer-king, he has limited powers from his mother and the body of his father. Although raised in the court by his immortal mother and her immortal goddess husband, the king, and their immortal daughters, Leonel is mortal and despised. Still, when the time came to choose a new guardian of the seas, he bested his half-sisters and won the trident. This does create a role for him, but it hardly smoothes the relationship with his sisters who hate him and his mother and step-father who barely tolerate him.

Leonel realizes that the storm that wrecked the boat is unusual. Magical. Investigating the wreckage, he discovers Isaura and takes her to another ship on its way to Eisland.

Of course, Leonel and Isaura remain connected, develop feelings, and seek the source of the black magic behind the storms. C’mon, it’s a fantasy romance. And obviously not everything gets tied up in a bow by the end, as it is the first of a trilogy. But, alas, you don’t want spoilers. What I will say is although key elements may be predictable, there are a number of surprises along the way, a lot of plot pieces that remain to be resolved, and the magic is not only in the powers of the gods and their progeny. Deen makes some magic herself with a vivid setting, memorable characters, deep and loving relationships, a family that almost anyone would want to have, and a mystery that keeps a few secrets hidden until the rest of the trilogy comes along.

One thing worth considering further is the impact of Isaura’s “brokenness” (the character’s description of herself, not mine). In the afterword, Deen shares a very emotional personal message to those women who struggle with infertility. She shares a similar message through the character growth of Isaura. Your worth as a person is not, must not, be defined by the cooperation of your womb. Womanhood, personhood, is so much more than being a parent. Isaura believes she cannot be loved because she cannot bear children. Realizing that was not true, that her value as a human being was not measured solely by her procreative ability, allows her to accept love in a whole new way. Relationships, including my own, require seeing other people as they are and accepting them, wounds and scars and “brokenness” and all.

That, dear readers, is not a fantasy. That is the heart of romance.

Our thanks to The Write Reads for our copy of Beneath Cruel Fathoms, provided for our honest review as part of the blog tour celebrating the winners of the BBNYA. The opinions here are solely those of Scintilla. For other perspectives on this novel, check out the other bloggers on this tour.

One thought on “Blog Tour: Beneath Cruel Fathoms, Anela Deen”