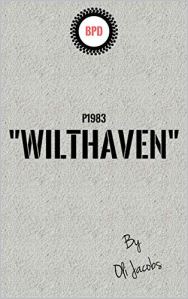 Wilthaven is difficult to categorize. Genius often is. Written as a sort of “found document” compilation, it reads as a series of reports from agents of the BPD, a secret agency devoted to protecting earth against the paranormal. For decades the BPD has been intercepting reports from and about the town of Wilthaven. Wilthaven does not exist in our world, but is in a different dimension, P1983. There, the town is captive to the whims of an eldritch god, Hq’tar. The reports that have come into our dimension describe a town that faces nightly disappearances of citizens, citizens who occasionally return as “avatars,” changed and enthralled to Hq’tar. Other creatures also wander the night, screaming and scratching at doors and windows. Residents remain captive in their homes at night. Those who emerge early are seldom seen again.

The reports are sometimes humorous but often chilling. Occasionally people from Wilthaven will arrive in our world, usually staying for a while before returning safely to their home. Not always, though. One man set off a bomb, killing himself and many others. Another Wilthaven man exploded spontaneously, fortunately in a closed room where no one else was hurt. Even those who do not meet a violent end, though, bring tales of a dark world where landscapes suddenly change (such as a mountain appearing overnight), children disappear, weather phenomena may include raining human organs, and walking in the forest is as likely to cause madness as it is to provide relaxation, and every conversation is punctuated by an almost obligatory “Hail Hq’tar!”

The real question behind these reports is “Why?” Why is our world intercepting these newspaper, radio, and television broadcasts? Why do libraries suddenly carry books from Wilthaven, books that they never purchased? Why do strangers appear on trains from Wilthaven when the worlds are not connected in any obvious way? Is it possible that Hq’tar is trying to break through to our world, to bring his cruel madness to another dimension?

Evocative of other “found” media (although I’ve never watched it, The Blair Witch Project comes to mind), Wilthaven is by turns funny and frightening. The shifting timeline (items are included in the order they are found, not in the order they were produced), the interjections by BPD agents and directors, the growing sense of doom all enhance the book. Jacobs shifts seamlessly from mildly disturbing to deeply horrifying in a sentence or two. An amazing example of this is a travel brochure touting visits to Wilthaven and giving customers advice on walking tours–and don’t let the probability of being lost forever or the moaning corpses beside the path keep you from enjoying your perambulations. The generally terse writing style leaves plenty of room in the imagination to fill in the gaps, making it uniquely disturbing to individual readers bringing their own ghosts with them. We should be safe, though, so long as we continue to behave normally in our interactions with each other and the world. 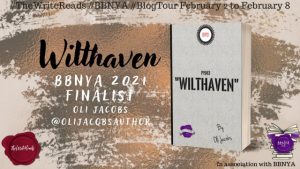 Our thanks to The Write Reads Blog Tours for our copy of Wilthaven, provided for our review as part of the celebration of the 2021 BBNYA top ten winners tour. The opinions here are solely those of Scintilla. For other perspectives, check out the other bloggers participating in this tour.