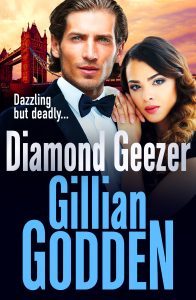 I am not exactly sure what a writer about ruthless and wealthy gangsters should be like. I am pretty sure I was not expecting someone whose regular job is working with patients for the NHS. Gillian Godden takes care of people during the day, then writes about killing people at night. (I doubt there is much overlap in the characters between the two jobs.) Regardless of the disconnect in my own mind, Godden’s gangsters are brutal and ruthless, yet also have complexity and occasionally surprising humanity.

Nick Diamond is a successful Chelsea lawyer who specializes in defending criminals. He is also the most violent gangster in Glasgow. He is able to keep those roles separate because almost no one in Scotland knows who he is. There, he is “The Undertaker,” a faceless monster who works through others to keep total control of drugs and prostitution in his territory.

Steve is one of the very few people to cross The Undertaker and survive. A former low-level addict and dealer, he refused an order to kill a child who was dealing in the neighborhood for someone else. On orders from above, Steve was set up to get arrested for armed robbery and served three years in prison. Released and back home, he is determined to go straight…and somehow get revenge on the man who ruined his life.

Godden’s narrative jumps seamlessly from Steve to Nick to other characters in the book: especially Maggie, a retiree who unknowingly works for The Undertaker; Fin, the childhood friend of Steve’s who set him up to get arrested; and Natasha, a young mother and neighbor of Maggie’s. The tension builds relentlessly through the book as Steve discovers that The Undertaker’s reach is much longer than he realized, as Nick’s two worlds begin to collide inexorably, as enemies of both men begin circling, and as all of the characters come together for a reckoning during a time of celebration.

Nick is an awful human being. That being said, he is also someone who fiercely loves his grandmother and someone who is very protective of (some) women, albeit quite willing to compel others into prostitution. Steve finds that going straight while under the thumb of The Undertaker is basically impossible, both a sign of his own helplessness and a show of the strength of The Undertaker’s power over him and his family. These two men, one seemingly in total control and the other apparently lacking in agency, reflect both ends of the criminal spectrum. For some, crime doesn’t pay. For others, the rewards sparkle like diamonds.

I still don’t think Gillian Godden meets my expectations for what a gangland writer should be. That is completely irrelevant, though, because her writing speaks for itself. Diamond Geezer is tough and violent and full of interesting characters. I quite liked it. 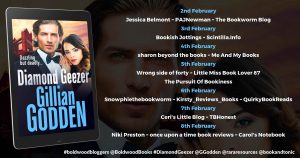 Our thanks to Rachel Gilbey of Rachel’s Random Resources for our copy of Diamond Geezer, given solely in exchange for our honest review. The opinions here are solely those of Scintilla. For other perspectives on this book, check out the other bloggers on this tour.