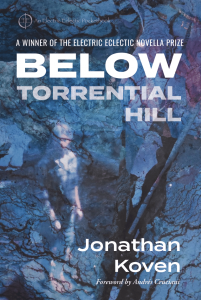 When a poet writes a coming-of-age story, you might expect it to be a little different from your typical bildungsroman.

It’s Christmas time, and a comet is burning over the small town of Torrential Hills. Tristen is a teenager living with his mother in the town. His father died some years before, his step-father more recently moved out, and his mother has turned to alcohol for solace. He and his best friend, Ava, tried being more than friends for a week, but she decided that was not right for her. He disagreed but did not want to lose her as a friend even if she would not be his “girlfriend.” As Christmas Eve arrives, Tristen is an emotional wreck.

Unlike many stories of this type, Below Torrential Hill is very tight and compressed. Technically a novella, it packs the sweeping emotions of a saga into what reads more like an extended short story, keeping the best of both formats. Using the town surrounded by a dark and almost awake forest, Tristen’s world is compact, cloistered, and smothering. He despises his mother’s descent into alcoholism…and steals her wine for his own use. He adores his barely-remembered father and resents the stepfather who was and is still there for him. He desperately wants a closer relationship with Ava but he pushes her away with violent words and irrational behavior. He sees the forest as the place that stole his father yet runs to it when his own mind becomes overwhelmed with the state of his life. Covering the span of just a few days during one December, this novella feels like it reveals a lifetime.

Tristen is not the only one who feels overwhelmed under the comet’s light. Ava is eager to leave Torrential Hill and go to college in the city, any city, anywhere away from there. Tristen’s mother lost her first husband to death (we are never told exactly how he died, but his body was found in the woods). Her second husband could no longer deal with her alcoholism and her depression. He also carried wounds from his past. His father died when he was quite young, and connecting with others is difficult for him. As these damaged characters rub against each other, their wounds open new wounds in others more often than they heal old ones.

Filled with rich imagery and metaphor, crammed with emotional twists and turns, capturing both the angst of teenage years and the brokenness we carry into adulthood, Below Torrential Hill reflects the harsh and beautiful landscape of the heart, cast into sharp relief by the unflinching light of a poet’s eye and a comet’s fire. 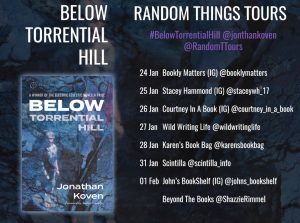 Our thanks to Anne Cater of Random Things Blog Tours for our copy of Below Torrential Hill, given in exchange for our honest review. The opinions here are solely those of Scintilla. For other perspectives on this book, check out the other bloggers on this tour.