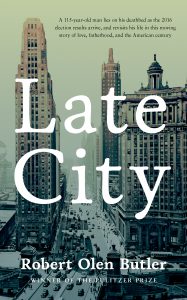 This novel takes place on a specific date at a specific time. It also spans the 20th century in its scope and story. The Late City is entirely about one man, yet it is also about a family, a country, a transformation. On a cold January day in 2016, Donald J. Trump was inaugurated as the 45th President of the United States. And minutes after he was sworn into office, the oldest living veteran of World War I began to die.

Sam Cunningham was 115 years old when he began to die in his nursing home room in Chicago, IL. In his final moments, he is given the grace–or at least the onus–to talk to God about his life. Perhaps heaven or hell hangs in the balance of the conversation. Perhaps that decision has been made already. Perhaps something else awaits. Whatever the outcome of the conversation, though, one thing is certain: these are Sam’s last moments alive on earth.

I could describe the basic direction of the novel as the story unfolds. Sam was born in Louisiana to an abusive father and a loving but trapped mother, very early in the 20th century. He lied to join the army at age 16 where he became a sniper. After mustering out at the end of The Great War, he moved north to Chicago to begin his career as a reporter. He rose to become the managing editor of the paper. In Chicago he met his wife, Colleen. They had one son, Ryan, killed in action during World War II. He was preceded in death by his son and by his wife.

But that’s not really the story. It is so much more. A backwoods lad teaching himself to care about the world and engage in the affairs of the day, despite the resistance and antipathy from his overbearing father. A peaceful youth who learned to kill and did so more than 100 times during the war. An uneducated young man, one lacking both formal education and worldly knowledge, emigrating on his own to Chicago to create a career and unexpectedly fall in love. A career-minded man who recognizes his flaws as a husband and father, but lacks the wisdom or knowledge or strength to correct them. An elderly man, living with regrets of what could have been.

Yet that is also not really the story. The Bible warns that the sins of the fathers are visited upon their children even to the third and fourth generation. Without getting into any theological disputes, one of the most personally meaningful interpretations I have heard of those words has nothing to do with the punishment for sin. It is the consequences of our choices that reverberate down the line. Sam was physically abused as a child and watched his mother subjected to physical and verbal abuse as well. Yet he is aware enough to know that his grandfather was also abusive, teaching his father, who taught him. Sam broke the cycle of violence, but struggled to overcome the emotional distance with his own son. His father never taught him. His father never learned it from his own father. Sam learned a number of things from his father that he rejected: he did not look down on African Americans, he held very progressive (for his times) attitudes toward women and laborers and others who were held down by society.

Some of those core values could not be unlearned. He might reject his father’s violence, but he struggled to fully accept his son for himself. He might recognize the harm done to him, but that doesn’t keep him from inflicting another form of that same harm on others. He might have left the backwoods of Louisiana for the urban jungle of Chicago, but the mores and values and the concept of “what makes a man a man” were much harder to change than his circumstances.

Can a person change? Are we destined to repeat the patterns learned in childhood? Can we ever let go of them or is that initial imprinting always going to guide our steps? Perhaps reading the story of one 115-year-old man dying in a nursing home as Trump takes the oath of office can help us answer some of those questions in our own lives. 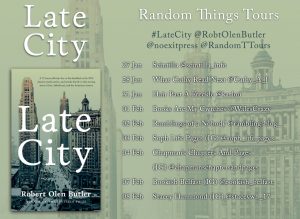 Our thanks to Anne Cater of Random Things Blog Tours for our copy of The Late City, provided solely in exchange for our review. For other perspectives, check out the other bloggers on this tour. The opinions here are solely those of Scintilla.