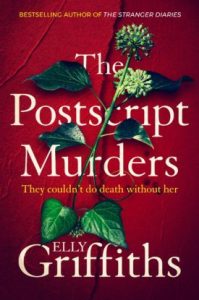 Peggy Smith appears to be an older retired woman living on her own in a seniors’ apartment. She has a few friends, does not get along with her son, and enjoys looking out her window and jotting down what she sees. Two dogwalkers. A young couple. Four joggers. That sort of thing.

She gets daily visits from home nurses, “carers” as they are called in Britain. Natalka, one of her carers, comes in one day to find Peggy dead in her chair. That is one of the challenges of Natalka’s job. Caring for an aging clientele means you will sometimes come in to find they have died.

Despite the way things look, Natalka believes Peggy did not just die of natural causes. Neither do Peggy’s friends Edwin (an 80-year old neighbor in the retirement complex) or Ben (owner of the coffee shack on the beach across from the complex). Natalka has found a couple of disturbing things in Peggy’s apartment, including a card that says, “Peggy Smith: Murder Consultant.” When they look through the books on Peggy’s shelves, many of them murder mysteries, they see that Peggy is mentioned in almost all of them: in the dedications, in the acknowledgments. Personal letters from authors are also in her apartment. It seems she was more than merely a retired lady in a rocking chair.

These intrepid amateur sleuths enlist the help of DS Harbinder Kaur. She is not certain whether there is a murder, but she agrees to check some things out. Then there is another death: one of the authors who mentioned Peggy in his books. This one is obviously a murder: a gunshot to the back of his head.

As the mysteries surrounding Peggy grow more involved, the dangers become more serious. Several authors received mysterious postcards warning of a reckoning visitor. Another author dies. Some mysterious Ukrainians seem to be following Natalka. Could Peggy’s death be tied to her mysterious past? Is it part of her mysterious present? Does her cold and distant son have anything to do with his mother’s murder? And is it even a murder, or did an elderly lady just die in her sleep?

Elly Griffiths writes mysteries that in some ways remind me of a carnival ride. They careen wildly from event to event, plot to plot, threatening at any time to throw their passengers off the rails. But they never do. Her characters are fun: wildly imaginative, creatively developed, and fiercely determined. They forge deep friendships, begin romantic relationships, and solve mysteries as they’re being powered by lots of Ben’s coffee. They are an unlikely team brought together by unlikely events, but Griffiths never lets them lose the plot or their purpose. Their quirkiness is almost a super power.

Griffiths appears to be having a lot of fun with this book. It often nears the edge of breaking that wall between book and reader, commenting that mysteries in real life are nothing like they are in books. There is even a brief appearance by a group of book bloggers (“Hey, honey, we got mentioned in this book!” “It just says, ‘book bloggers.’” “Yep! That’s us!” It wasn’t actually us, but I’m claiming it anyway.)

I may be fairly new to the Elly Griffiths’ fan club, but I am ready to pay my dues and go to the meetings. Her mysteries are filled with inventive plots, unexpected twists, and unique characters. They never fail to reward.