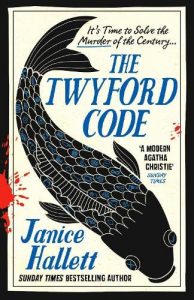 Every so often a novel comes along that tells its story through plot, dialog, characters, and something else, something unexpected and unusual. The Twyford Code is one of these novels. Rather than a standard narrative, Janice Hallett has chosen to unfold her novel through a series of audio recordings by the main character, a recently released prisoner named Steven Smith. Smith distantly remembers an incident from school, one that seems important to him now, but the details are quite fuzzy in his mind. So he sets out to find people who may be able to help him, people who were there with him in Miss Isles’ class.

In 1983, when Steven was in what we in America call Middle School or Junior High School, he found an old book on the bus. He took it in and showed it to his English teacher, who realized the book was full of notes and annotations. The work of a World War II era children’s writer, Edith Twyford, the book was banned in many schools and ill-regarded by many others. Miss Isles, though, became convinced that the book held some sort of secret and determined to discover that secret. To that end, she took her class on a field trip–and she never returned from that trip.

For some reason, Steven Smith vividly remembers finding the book, can still hear Miss Isles reading it aloud to the class, and knows that she did not return from the trip. What he cannot remember is what happened during the trip. What did they see? How did they get back home? Who drove the minibus?

Now an adult, Smith begins seeking out his classmates from that fateful trip. Their stories are all wildly different. One claims he was not there at all, though Smith specifically remembers his presence on the bus. Another claims that not only did nothing happen, but Miss Isles actually drove them home herself. Others remember many of the same details that Smith does, along with some other pieces to the puzzle. The questions that started Smith on his journey, though, not only remain unanswered but more questions arise. What did Miss Isles believe she had discovered? What value did this secret hold? And who else might be looking for it.

The transcribed audio style of the book is itself quite fascinating. Anyone who has used speech to text software knows it is both very useful and profoundly frustrating. Hallett captures this dichotomy perfectly in her book. The English teacher is constantly written as “missiles.” Sometimes when there are multiple speakers on a “recording,” they are simply called “voice 1” and “voice 2” and it takes a few sentences to determine which is which. The accents and vocabulary of the speakers, especially Smith, come out as they would in speech rather than as they might be written. Sometimes this makes for a challenging read, but always it keeps the story fresh and intriguing.

Janice Hallett has created a sharp and intense story with a distinctive storytelling style that really stands out from the typical mystery novel, or for that matter almost any other novel. It almost makes me want to go back and reread some of the children’s novels I enjoyed 40 and 50 years ago. Maybe the Bobbsey Twins or Tom Swift have their own codes hidden within, waiting to involve future readers in a mystery that long outlived their original authors. 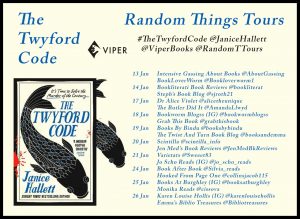 Our thanks to Anne Cater of Random Things Blog Tours for our copy of The Twyford Code, given so we could participate in this blog tour. For other perspectives on the novel, check out the other bloggers on the tour. The opinions here are solely those of Scintilla.

One thought on “Blog Tour: The Twyford Code, Janice Hallett”