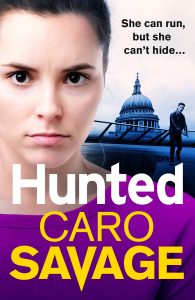 Bailey Morgan is used to being the hunter. A skilled undercover cop, DC Morgan excels in taking on a criminal personna, infiltrating networks, and taking down serious players in the London crime scene. Her most recent case resulted in the capture of a major drug importer, a man who had made millions of pounds off the misery of others. Large amounts of that money were hidden, some of it in cash, and available to him to solve his problem before trial began. His problem: the testimony of one Bailey Morgan.

The book opens with a crown prosecutor being ruthlessly tortured for information. He is one of the very few people who knows the identity of the undercover officer who cracked the case. Although he soon realizes that he will die, he refuses to give up the name…that is, until the hitman threatens to kill his family. He would willingly die before giving up her name, but he will not sacrifice his wife and children to protect Morgan. Just like that, Morgan goes from being the hunter to the hunted.

We soon learn that the killer is probably a man known only as “Rex.” Tied to at least 9 murders and likely many more as well, “Rex” is known to the police only by reputation. Not even his clients can identify him. No known witnesses have survived. Bailey Morgan, though, is no ordinary victim. She is a hunter herself, a predator capable of bringing down much larger prey. The cat and mouse game gets underway, with it being a very open question as to which is the cat and which is the mouse. The winner lives. The loser almost certainly does not.

Caro Savage is the pen name for an author who turned from bookselling to bookwriting. Years of exposure to books of all sorts does not always translate into skills in writing. In this case it has. Savage creates fascinating characters who are complex and intriguing. Rex is more than he seems. Morgan is both proud of and tormented by her job. As in life, sometimes the plot twists on a dime: a voicemail message heard by the wrong person, a chance encounter that almost happened but did not, an infidelity discovered at a delicate moment. These are things that we may never know changed a life. In this novel, we have the luxury of discovery that may not give us an advantage in our own lives. Maybe that’s just as well. Would we really want to know that we missed our killer by moments? Would we be able to accept that our actions had a butterfly effect that shattered lives? Our psyches may be protected as much by our ignorance as they are by our innocence.

Bailey Morgan is a smart, brave, and determined cop. None of that may be enough when she is being pursued by someone who is also smart, brave/ruthless, and determined. One thing is certain: if a predator is being stalked by a predator, the end is likely to be as violent as it is uncertain. 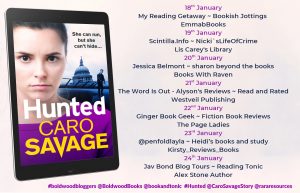 Our thanks to Rachel Gilbey of Rachel’s Random Resources for our copy of Hunted, given in exchange for our review. The opinions here are solely those of Scintilla. For other perspectives on this novel, check out the other bloggers participating in this tour.