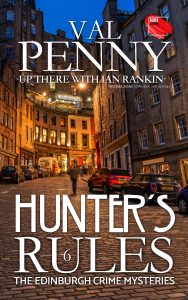 Detective Inspector Hunter Wilson has the perfect evening planned with his fiancée, Dr. Meera Sharma. A swanky dinner at the famous Pompadour Restaurant is to be followed by a night upstairs in a suite of the Waldorf Astoria hotel in Edinburgh. The night is perfect, the mood is set, the couple is in love…and the lift has a gruesomely disfigured woman bleeding on the floor.

That, my friends, can end a romantic mood quite abruptly.

Over the previous couple of months, two bodies had been discovered outdoors. Both of the women had died following the savage removal of their eyes ante-mortem. Both had been drugged, both had been left to die from the elements or from bleeding. This third victim was different in one major regard from the previous two. She was still alive.

While Meera fights to save the woman’s life, Hunter calls his colleagues to come and begin the investigation. The possibilities include a man who is currently in jail, another man who was out of the country, a man who was in rehab, a disgraced ex-cop, and a local optician who is the neighbor of a small-time hood…a hood who is himself in a relationship with the victim’s sister and is the son of a jailed criminal. Oh, and Hunter himself is identified as a possible suspect, though his public romantic dinner quickly rules him out. Still, the list of suspects is long and seemingly impossible, the vicious and public nature of the attack has raised the stakes, and the pressure is on to find the attacker/killer before he strikes again.

Val Penny is an American author living in Scotland. I have noted before that Edinburgh writers love their city, with vivid settings and detailed descriptions of the buildings, neighborhoods, and character that makes it unique. That seems to extend to those who have adopted the city as well. Penny’s Edinburgh includes the rich and the privileged (one character insists on others using his title of ‘Sir’) as well as those living in modest homes and making a living skirting the edges of the law. Considering the number of mysteries, thrillers, and macabre stories I have read using this Scottish city as their setting, I have to conclude that whether or not Edinburgh is a good place to live, it is a great place to die.

Hunter’s Rules is a smart mystery that has interesting characters and a clever plot. Using Edinburgh as a backdrop is always a good idea. This definitely makes me want to explore other books by this same author. 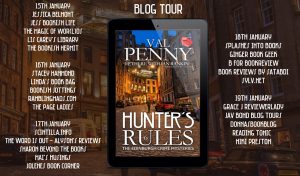 Our thanks to Rachel Gilbey of Rachel’s Random Resources for our copy of Hunter’s Rules, given in exchange for our honest review. The opinions here are solely those of Scintilla. For other perspectives on this book, check out the other bloggers on this tour.