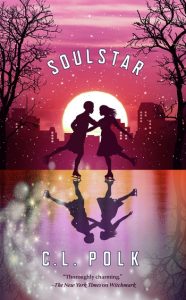 Robin Thorpe has worked for years in the hospital, nursing and caring for patients. She has avoided using her magical gifts of speaking with the dead for fear they would lead to her being arrested, just as her spouse had been arrested 20 years earlier. But there is a new era coming to Aeland. The chancellor, Dame Grace Hensley, has reached out to the underground witch community for help in controlling the storms that are pummeling the country. In exchange, she has promised to lend her support to ending the arrests and imprisonments of witches.

Robin is a community organizer. She has ably worked to organize strikes and demonstrations, keeping the underground resistance financially healthy and unified in purpose. Others are the public faces, the visionaries, the ones who inspire and lead. She makes sure things get done.

Soulstar reaps the benefits of the rich world created by C.L. Polk in her debut novel Witchmark and its successor Stormsong. Robin Thorpe figured in the previous two books. Here, she gets to shine. Dame Grace and her brother Dr. Miles Hensley are strong supporting characters, but Thorpe is the focus. Thorpe, unlike the other lead voices, is a woman of color. Although the novels do not sacrifice the narrative to make their point, it is clear in all three of them but especially in this one that people of color are disadvantaged in her world by elites and a government that is deaf to their needs. They ignore the needs of all of their poor citizens, but clearly a disproportionate number of the poor are also people of color.

Thorpe finds herself thrust into more of a leadership role after the death of the major voice of the movement. She immediately has to navigate the waters between a king reluctant to lose power, elites reluctant to lose money and status, and people who are sick and tired of being oppressed and want change now. She also has to sort out her relationship with her spouse, a nonbinary witch who has been released from 20 years in the asylum. Zelin (who uses the pronouns khe/kher) has been deeply wounded by kher imprisonment…and Thorpe may have too many demands on her time to devote to kher needs.

Soulstar is a fitting conclusion to this winning trilogy. Plot threads that started in Witchmark and Stormsong get tied up nicely here. I can only hope that some of the oppressed people in our own world can be as successful in finding a better future.