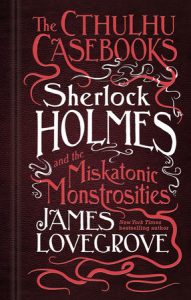 When a mysterious stranger is found, unable to speak other than uttering a few words in an ancient language few know and fewer dare use, it falls to Sherlock Holmes to discover who he is. Using his extraordinary deductive powers he determines that the young man is from America, probably near Boston, and is an intellectual. Strangely enough, although he seems to have virtually forgotten English, he occupies himself by writing in the ancient and almost abandoned language that the old gods used when communicating with creatures on earth.

Before Holmes and Watson can decipher the puzzle entirely, the man disappears from the hospital. While the police look down, the detectives look up. It seems the man has flown off, born aloft by a mysterious creature known as a “nightgaunt.” Eyewitnesses, albeit hardly the kind one would call into court, lead the detectives to believe that the man did not leave willingly but was captured by the creature.

But what is a young academic from New England doing in old England? What connection is there between this young man and an adventurer in town who was from the (fictional) Ivy League Miskatonic University? How were they connected to an ill-fated voyage up the Miskatonic River in search of strange beasts more familiar to cryptozoologists than to more traditional biologists? And just where would the nightgaunt have taken his prize?

The answers to these questions lie in a hidden house far from any village, a strange journal detailing the events of that Miskatonic River exploration, and an encounter with an old enemy who has found new power in an unholy alliance.

James Lovegrove weaves a compelling tapestry with elements from Sir Arthur Conan Doyle, H.P. Lovecraft, and first-person travelogues. He takes the familiar and distorts it into something new, a bit unsettling, and completely unexpected. If you are familiar with either Doyle or Lovecraft the comparisons are easy to make. But the results of this amalgam are something neither author would have envisioned and are a unique contribution in homage to earlier masters.