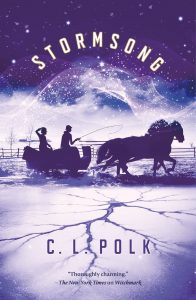 Witchmark is a fascinating novel about an Edwardian-like society that uses witchcraft both to preserve society and to maintain the social fabric. Society, industry, and government leaders from the best families are allowed to practice magic in secret, magic they use to control the weather–and other witches. Commoners born with magical gifts are locked up in asylums, or worse.

Days after Dr. Miles Hensley, his sister Dame Grace, and his boyfriend Tristan (who is not human but something much more mysterious and powerful) succeed in destroying the foundations of the leading family’s power, Grace is named as chancellor. She succeeds her father in the role, a role she deserves based on her own magical power and leadership abilities. Despite her father being in prison for his role in a conspiracy, Grace’s participation in ending her father’s plans demonstrates her loyalty and she is named to the post by the queen.

Much is still not right, though. Stormsong is told from Grace’s perspective (Witchmark focused on Miles). She may hold the title of chancellor, but that definitely does not mean people will automatically follow. Not all of the children of the conspirators have turned their backs on the old ways. Witches remain locked up in asylums. Her father continues to pull strings from his prison cell. Storms more powerful than ever are brewing both in the sky and in the palace, and Grace must use every resource at her disposal to avert catastrophe.

It is no time to be distracted by a lovely reporter who is trying to reveal the secrets of the palace to the world.

Stormsong is just as fun as its predecessor. It is a beautifully constructed fantasy, set in a sort of alternate past filled with magic and the presence of seemingly divine immortal beings. It is also a love story, with Grace and Avia orbiting each other warily, caught in the gravity of undeniable attraction, pushed apart by the centripetal forces of politics and competing allegiances.

There is certainly a strong subtext that speaks to readers living in this world. In Polk’s imagined world, there is no shame in loving whom you love. But using magic is a crime, and imprisonment in asylums is the punishment. Yet the leaders can practice magic freely, so long as it remains in the closet and hidden from society. This makes it an incredible weapon for the elite. Conformity and maintenance of the power structures become obligatory as the elite share secrets that could bring them all down. Truth is the enemy. Power is the end, not the means. It is not until siblings determined to do the right thing come together that change can happen.

I can’t wait to see what book 3 of this series brings.