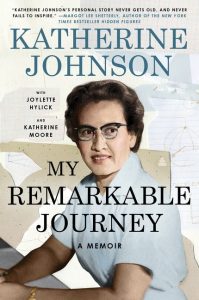 You can’t judge a book by its cover. I know that. But the cover of Katherine Johnson, My Remarkable Journey caught my eye for a very surprising reason.

The picture is black and white of a young woman, sitting demurely and smiling gently at the photographer. There is nothing particularly unusual about the photo. The young woman is attractive, modestly dressed, with glasses and hair that are both timeless and dated. She looks like many young women of her age.

My mother was white as white can be. Katherine Johnson was African American. But I have a picture of my mother from about the same age. Similar hair style. Similar glasses. Similar clothing. Similar smile. I’ll admit, I did a double-take, and my heart flooded with memories of a very good woman who spent her life as a nurse helping others.

What does this have to do with the book? Katherine Johnson was a mathematician. A good one. A very good one. She worked for NASA at the very beginning, calculating trajectories for early spaceflights long before electronic computers were usable. In fact, she and the other women who worked for NASA actually held the title of “computers.” Engineers, then an exclusively white male profession, were asked to focus on big picture views and leave the busy work of math calculations to others. Of course, those others had to be brilliant. Katherine (who was Katherine Goble when she was hired by NASA) had been a child prodigy. Graduating high school early, she went to college and majored in math. She was so good that her professor designed advanced classes solely to challenge her. As people say today: Challenge Accepted.

How good was Katherine Goble? Good enough that before John Glenn went into space for the first time, he called her boss and asked him to have “the girl” check the calculations for his flight. Of course, “the girl” was an adult woman, a mother, a widow, a genius.

Yes, this memoir talks about her job. It goes into the Presidential Medal awarded to her by President Obama. It talks about the amazing book and film Hidden Figures based on her life and the lives of other female computers at NASA in the early days of the space race.

This memoir tells about her whole life, though. Growing up in a loving family that supported and affirmed their genius daughter. Meeting the love of her life and raising their family together, only to watch him die prematurely from a brain tumor. Finding love again later in life, with a good man who loved her daughters as well. Losing one of her own daughters. Katherine Johnson was not just a computer. She was a person who loved and lived and lost and was also really, really, good at math.

She makes no pretensions about her role in the civil rights movement. She admired it, but did not participate actively in the marches or sit-ins or other nonviolent protests for civil rights. She did, however, make her own stand in her own way. She used the closest bathroom to her desk, even when it was not marked “Colored.” In a mostly white office, the nearest bathrooms for African Americans were in another building. When the male engineers were meeting separately, she firmly insisted that she should be there in the room with them so her calculations were meeting the specific needs of the project. She got into the room. She may not have been an activist. She was, however, principled and determined and persuasive, and within her sphere of influence she made a lasting difference.

Reading this book made me think about my own mother. On the surface, they have little in common. But their core principles, their decency, their commitment, their faith, their quiet resolution were quite similar. After reading her memoir, I am impressed with two things. One is how brilliant and brave Katherine Johnson was, earning her place in a world that was stacked against both women and African Americans. The other is how much alike we humans are. We may erect artificial barriers, create imaginary tribes, insist on arbitrary distinctions to keep us apart. But we are all very much the same at heart. There are few who exemplify this better than this “girl computer,” Katherine Johnson.