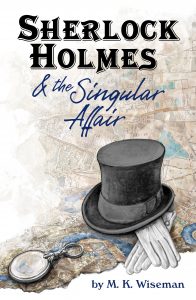 Author M.K. Wiseman returns her attention to adventures of Sherlock Holmes that somehow missed the collection created by Sir Arthur Conan Doyle. In Sherlock Holmes & the Singular Affair we see Holmes in a pre-Watson case. A young woman visits his home (not yet Baker Street, but Montague). She has become engaged to a young man who has gone missing. A stranger to her, though, has usurped his name and his place in society. She wants to know where her fiance has gone.

Holmes takes the case and pursues it with his typical vigor and intellect. It is no spoiler to let you know that Holmes solves the case and makes it to the end–prequels do offer some certainties that later volumes cannot. Wiseman, though, approaches this story with some nice twists on the typical Holmes adventure.

First, she injects more than a little humor into the narrative. At one point near the climax, Holmes is having a very serious conversation with another character while they are in a theater. In the background the musical goes on. Wiseman interrupts their conversation with the act on the stage: some singing and dancing policemen lamenting their lot in life. The contrast between the urgent message the detective has and the comical play in the theater is handled very well.

Second, we see the importance of John Watson as much from his absence as we do from his presence. Holmes is alone. When he is in danger, no one has his back. When he disappears, no one notices. Eventually Lestrade or Mycroft would have noticed his absence. By then, though, the trail would be ice cold. Sherlock Holmes may be a great detective, a brilliant intellect, trained to handle himself in a fight. He is not a superman. Lacking Watson’s protection and guidance, Holmes finds himself in some tight spots where an ally would have been most welcome.

Wiseman writes Sherlock Holmes stories in homage to Doyle’s text. The language and manners are very Victorian. The young lady who starts Holmes on this case is headstrong and bold, but also proper and very much of her era. Wiseman is not trying to reboot the timeline (to borrow a concept from sci fi TV shows and movies). She is celebrating it and inviting us to celebrate it with her. This is a book that should appeal to both new and old fans of Sherlock Holmes.

Our thanks to Rachel Gilbey of Rachel’s Random Resources for our copy of Sherlock Holmes & the Singular Affair, given to us so we could celebrate the book’s launch on December 7, 2021. Check out the other participants — and most of all, check out this book. The opinions here are solely those of Scintilla.