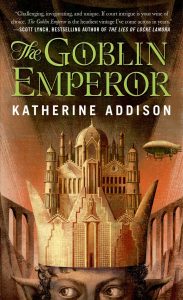 Maia grew up far away from the palace. Although he was a son of the emperor, his mother had fallen into disfavor with her husband and had been exiled to a far off city. When Maia was eight, she died and he was sent to live with a cruel and abusive distant relative. He might have been the son of the emperor, but he was as distant from the halls of power as anyone could be. Part of this distance was geographical. Part of it was also very, very personal. Maia’s mother was a goblin, his father an elf. Despised by many elves and unfamiliar with the goblin world, Maia had no reason to believe that his future had any prospects for advancement.

Abruptly awakened one day by his relative, he is summoned to greet a message from the capital. His father, the emperor, had died in an airship crash. Along with the emperor, all of his adult sons also perished. Maia was the last remaining son, and therefore the heir to the throne. Basically overnight he is taken from his distant home to the capital and thrust into the most powerful seat in the country.

The Goblin Emperor is the story of how Maia takes the reins of power. He may be emperor, but he is untutored in the politics and manners of the empire. Others aspire to peel away his authority. Some would see him dead, others would use him as a figurehead to accomplish their own ends. Navigating these dangerous and treacherous waters requires skill and wisdom, traits Maia has never had the opportunity to practice before.

Katherine Addison has created a marvelous world with an unlikely hero at its center. Maia is young and naive. He is also a quick learner and wise beyond his years. I found myself cheering for his victories, fearful for the threats against him, hopeful for his survival and his success. The complex elvish and goblin world she tells is Byzantine and sometimes bizarre. The reflections on the limits of power are fascinating. An emperor has the power of life and death, but is not allowed to dress himself. One wonders whether other powerful figures confront similar struggles in their own lives.

The Goblin Emperor is everything I enjoy in an epic fantasy. A winning protagonist, incredible stakes, complex world-building, and a quest to find one’s true self. I thoroughly enjoyed it.