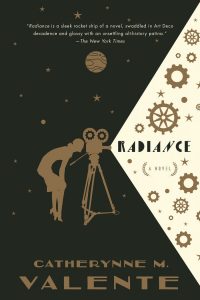 Every once in a while I come across a book that leaves me wondering at the end of the last chapter, “What in the world did I just read?” Radiance by Catherynne Valente is one of those books.

It is sci fi…but in the VERY old school way, with oceans on Venus and colonies all the way out to Pluto. People live on Neptune, they live on Mercury, they drink milk from the “callowhales” of Venus, they make movies on the moon. Actually, there is no “Hollywood.” The moon is the home of every major studio, every leading lady and man, every major producer and his couch, every director.

It is alternate history…but almost everything is alternate. Movies are mostly silent films because the Edison family still owns and controls the patents to “talkies.” Space travel and living on other planets is ordinary by the early 20th Century.

It is a mystery…but it is a deeply noir story of a woman’s disappearance, told through old movies and documentaries, gossip magazine articles, investigative interviews, and various other means (at one point including a ship’s manifest). It is not linear at all; family movies from the 1920s may be followed by a script from the 1950s, then a conversation in the 1960s about a visit to Mars in the 1940s.

The book jacket describes Radiance as “a decopunk pulp SF alt-history-space-opera mystery.” I have no idea what that exactly means, but now that I have read Radiance at least I have something to hang the meaning on.

Severin Unck is a child of the moon, which is to say in our world she is a child of Hollywood. Her father is the great director Percival Unck. Her mother is unknown. Her entire life has been spent in front of the camera: from family movies taken by her father beginning during her infancy and continuing throughout her life, from small to leading parts in his movies, from being mothered by a constantly changing list of Percival’s wives (I think it was six in all, none of whom was her biological mother). Even as an adult, seeking to make her own way and forsaking fiction for documentary films, the camera is constantly rolling. She is the star of her own films, films which take viewers from planet to planet, moon to moon, looking for stories that she needs to tell. Behind the scenes, B-roll footage, the camera’s eye follows her everywhere.

The moments leading up to her disappearance were filmed…but the footage was damaged and the rumors surrounding her disappearance are constant. Was she murdered by her lover? Was she lost at sea? Was she eaten by a callowhale? Did she go into hiding? Is she actually dead, or is she alive somewhere, enjoying the fame she has in anonymity? Radiance looks at all of those options and more.

Sometimes we can get caught up in trying to make a book fit our expectations. Sci-fi should conform to the laws of science as we know them today, or at least offer a fig leaf to cover the exposure of their violation. Mysteries should be mostly chronological, or at least follow a logical progression and have a clear discovery of the bad guy, hopefully with justice prevailing.

Sometimes, though, a book should just be experienced. Catherynne Valente is exploring new territory using an old medium. Radiance is a love letter to very old school sci-fi, before we knew that Venus’s clouds were hiding a hellscape rather than an ocean planet, before we appreciated that the cold of Pluto and the gravity of Neptune and the heat of Mercury were not obstacles that we could overcome with heavy coats or pixie dust or SPF 1297 sunscreen. It is a love letter to a bygone Hollywood, when cinema was magic and we could pretend that the golden age was not actually a shiny paint job hiding a very dark reality. It is a love letter to possibility and language and mystery and hope.

I am still not entirely sure what I just read. But I know that it was very different and very, very special.