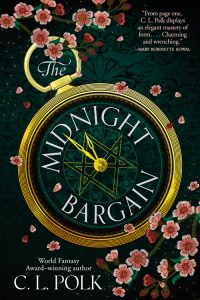 Beatrice Clayborn is the oldest daughter of a socially ambitious but very economically unfortunate merchant. She also aspires to become a mage. She secretly practices magic with the help of coded grimoires, books about magic that have themselves been magically disguised to appear as ordinary tomes to the uninitiated. In one final, desperate hope to surpass their dire financial circumstances, Beatrice’s father has bet everything on one goal: Beatrice finding a rich husband.

Marrying carries with it the expectation of bearing children, and that is a major problem for Beatrice’s own ambitions. For reasons that become clear through the book, magical power is very dangerous to unborn children. Not just to the children, but the magic can be fatal to others as well when the unknowing child becomes a conduit for powers beyond their control. Therefore, married women are not allowed to practice magic. They are, in fact, prevented from doing so by a magical locket that is hung around their necks during the wedding ceremony, a locket whose key is given to their husbands. Although some societies do allow women beyond childbearing age to practice certain small magical tricks later in life, Beatrice’s culture does not. When she marries it will save her family. It will also destroy her dreams.

The Midnight Bargain is Polk’s second foray into an Edwardian-inspired culture filled with the class distinctions and gender expectations and flouncy dresses and waistcoats that any such novel requires, but with magic. Beatrice is an amazing protagonist. She is fiercely determined to save her family, she is even more determined to practice her magic, and she is desperate to find a third way that allows her to do both.

What she absolutely does not expect is to fall madly in love.

Polk puts Beatrice into a conundrum that is both thoroughly modern and recognizably Edwardian. Follow one’s dreams or follow one’s heart? Save your family or save your sanity? Marry for love or marry the nasty dude who paid all your father’s debts? OK, that last one is not as common today. Still, we see the dilemma facing Beatrice and we are eager to see how she resolves it.

Polk is a gifted writer with great stories to tell. The Midnight Bargain is more than just a new take on a popular fairy tale. It is a powerful story of love, strength, and finding your way through a society with different values.