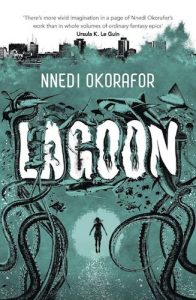 Growing up with American science fiction, I have read many versions of “aliens have landed in” New York or London or Los Angeles or even Kansas or Iowa.

Lagos? Nigeria? Not so much.

Still, if aliens did come to Earth, why not Lagos? It is one of the largest cities in the world. It is perhaps the leading city in Africa. It is home to a diverse population, a vibrant cultural life, an expanding economy. Other than a view of the world that is skewed toward America and Europe, there is no compelling reason why aliens should choose to land in one of those countries rather than Nigeria or China or Brazil.

In Lagoon, a spaceship has landed off the coast of Lagos. Three people are brought together on the beach. Adaora is a marine biologist. She is on the beach after a fight with her husband left her face bruised and left him pinned to the floor by a mysterious force that neither could explain. Agu is a soldier. He has fled his barracks after being beaten for interfering in the rape of a woman by other soldiers, including his commanding officer. Anthony is a Ghanaian rap star whose albums are known worldwide. He is clearing his head on the beach after a concert in Lagos.

A wave comes ashore, grabbing the three of them and pulling them into the water. When they return, a fourth person accompanies them. Ayodele looks like a woman, but she is one of the aliens, an ambassador who has taken human form to interact with the people and introduce humans to the fact that they are not alone.

What follows is both uniquely African and also tragically human. Once the presence of aliens is known, people respond. Some see an opportunity for profit, hoping to kidnap the alien and use her powers to their own ends. Some see an opportunity for exploitation, hoping to harness the presence of the alien to enhance their own standing in the world. Soldiers want to capture or kill her. Mobs want to destroy her or worship her. And through it all, the three chosen humans struggle to come to grips with their own roles in this drama. Adaora deals with the impact on her husband and children. Agu tries to reconcile his position as a soldier with his responsibility to the world. Anthony wrestles with the price and power of fame and how it might help or hurt Ayodele’s mission.

Although some of the responses to the alien reflect the Nigerian setting of the book, most of the book points out just how predictable we humans are. In the face of the new, the strange, the uncontrollable, the frightening, we as a species are a mess. We riot and rape, we run and hide, we burn and loot, and sometimes we rise up and stand tall. These responses can be seen in our reactions to a worldwide pandemic. How much more intense would they be in response to the arrival of an alien spaceship?

Lagoon is a brilliant story by a vivid wordsmith with an exceptional imagination and a finger on the pulse of humanity. Okorafor’s voice demands to be heard.