Book Review: The Girl with No Face, The Daoishi Chronicles Book 2, M.H. Boroson 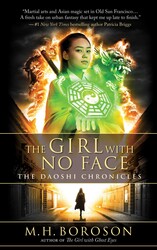 Fantasy: The Girl with No Face, The Daoishi Chronicles Book 2, M.H. Boroson

Xian Li-Lin saved San Francisco’s Chinatown, saved her father, and proved that her ability to see spirits was not a curse but a gift. As a result, she has been disowned by her father, forced to live in a rival Tong’s territory, and committed to guarding the Tong leader for several years.

She takes her duties seriously, though, not only guarding the family but helping the community with spiritual needs such as guiding the dead into their afterlife and honoring the ancestors. When a local gambler comes to her with his dead “paper wife,” a child of only about 9 years old, she is horrified to see that the girl has died from a strange plant sprouting within her body. Flowers bloomed from her nose and mouth, but when the stems were cut the girl’s blood poured out. This kind of magic is unknown to Li-Lin, so she turns to the most powerful and knowledgeable magician she knows; a man who unfortunately does not wish to see her.

It turns out there is a lot of strange magic going on in and around Chinatown. Someone is trying to empower a territorial God to rule over the Chinese in Northern California. Although this can be done without her father’s help, it should not be done that way. Still, someone is trying to do just that. Li-Lin is looking into the death of the child when she encounters another little girl in need of help–a girl with no face. This girl is fleeing the would-be local God and is pursued by his servants: two guardians of Hell and a poetry-spouting rat. And Li-Lin is pursued by dreams of her late mother and murdered husband, dreams that remind her of her own failures to save their lives.

If all of this sounds very odd and exotic, you are probably like me and were not raised in a culture that shared Chinese folklore. M.H. Boroson has studied Chinese traditions and religion since childhood. In the Daoishi Chronicles he tries to bring those traditions into a new world, weaving them together with the history of Chinese Americans and setting them into the context of a San Francisco that abused, misused, and resented these immigrants from Asia.

Boroson uses many of the painful pieces of history to give life to his story and characters. I was aware that Chinese “coolies” were the main laborers who built the railroads in the west that connected the nation from coast to coast. I was not aware, though, that a number of the ships ostensibly bound for the US (and the backbreaking work, appalling working conditions, and open racism that awaited them here) were actually headed instead to Peru, where the Chinese were literally enslaved and forced to work while bound together by chains. Many died while still chained to their group, their bodies simply dragged or carried until a slavedriver could be bothered to remove the manacles and leave the corpse. Not to say that things were significantly better for Chinese in the US. Hundreds, probably thousands, of unmarked graves lie alongside the tracks laid and in the tunnels cut for the transcontinental railroad, graves of Chinese laborers far from home seeking to find a better life than the one they left.

The Girl with No Face is an American story. Boroson makes it clear in the afterword of the book that although details are taken from traditional Chinese ghost stories and actual historical events, it is intentionally and deliberately altered and mixed together to reflect the fact that the American Chinese experience was not that of a single group or tradition but was an amalgam flung together by the whims of fate and the vagaries of time. What makes it stand out is that it is an American story with virtually no white people. This fantasy is one with Chinese-American characters living in a Chinese-American community which barely intersects with the white-American community that resents and rejects them. It is a fantasy and not a history, but often fiction tells truth more compellingly than even the best written histories do.

Book Review: The Girl with No Face, The Daoishi Chronicles Book 2, M.H. Boroson