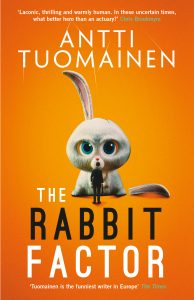 Henri Koskinen likes things to be predictable. Orderly. Logical. Mathematical. He is an actuary, responsible for calculating sundry probabilities that form the basis for insurance companies. It is difficult and exacting work, but Henri loves that sort of thing. Math never lies. It is right or it is wrong, never with any shades of gray.

His workplace, though, is less predictable. His boss wants him to be a team player. To get in touch with himself. To emotionally connect with his coworkers. It is not logical, it is not rational, it is not necessary. Apparently, Henri is also not necessary, as he is fired.

While reeling from this unexpected severance, a lawyer reaches out to him. Henri’s brother has died and left everything to him. “Everything” is essentially the YouMeFun Adventure Park. An adventure park is different than an amusement park because…well, it just is, and Henri explains the difference several times in the book. It becomes one of the running jokes throughout the book. The explanation is not nearly as important as the reactions of those hearing it explained. Those range from bemusement to confusion to anger.

We are actually introduced to YouMeFun and Henri before we learn any of the above information. Henri is fixing a rabbit. Specifically, a three-meter tall rabbit that stands as a decoration in the park. While doing this late at night, he is interrupted by a prowler. A knife-throwing prowler, seemingly intent on killing him. Fleeing for his life gives Henri the chance to reflect upon the circumstances that brought him to this point. Nothing in those circumstances was predictable, orderly, logical, or mathematical. In fact, it is quite shocking to him that an actuarial mathematician would be fleeing an assassin through the dark and silent depths of an amusement adventure park. It is even more shocking that he is that actuarial mathematician.

Antti Tuomainen is a wonderfully droll noir writer. (That is not a sentence I could have imagined writing before being introduced to his books.) Part of the current generation of Scandinavian Noir authors, his work has been acclaimed throughout Europe for its dark humor and brilliant exposition of the human condition. I would love to see him get a larger audience in my country. As a long-time retail worker, I completely understood many of the insights in the book, particularly this one: “It turns out that customer service is very difficult. And it’s because of the customers.”

Yes. Yes it is. Apparently Finnish customers have more in common with their American counterparts than they may care to admit.

Tuomainen may be a Finnish writer focusing on Scandinavian noir, but his work translates quite well to this American. Of course, a fair amount of that credit goes to the translator, David Hackston. Hackston has become a regular translator for Tuomainen and other Finnish and Swedish authors. It is easy to see why this collaboration works well. Hackston not only translates the words, but he translates the culture so smoothly that I occasionally had to remind myself that this was set nearer to Helsinki than to Boston or Dallas (or London, given the publisher’s use of British spellings of words). 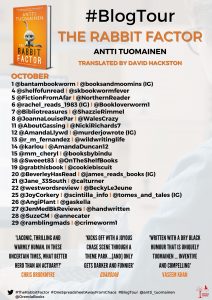 Our thanks to Anne Cater of Random Things Blog Tours for our copy of The Rabbit Factor, given solely in exchange for our review. The opinions here are those of Scintilla. For other perspectives on this book, check out the other bloggers on this tour.

One thought on “Blog Tour: The Rabbit Factor, Antti Tuomainen”