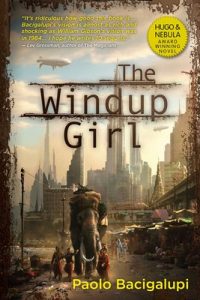 One philosophy of teaching swimming is to throw the student into deep water and let them discover how to swim by being forced to survive. This is certainly not a recommended technique, though it has its adherents.

Some novelists use the same approach, albeit with much less likelihood that their readers will drown. The Windup Girl is such a novel. Set in a dystopian future Thailand, the novel follows several characters whose paths intersect at some crucial times. Rather than introduce the world or explain what is going on to the reader, the author chooses to let the characters wander through their world, revealing it to us by their reactions, thoughts, conversations, and crises. Soon, the reader finds her/himself understanding this world and these characters. “Sympathizing” may be too strong a word. These characters are troubled people with plenty of trouble still to share. But understanding their world helps us to understand their flaws, maybe with the bonus of seeing our own world in a different light.

Anderson Lake works for AgriGen undercover in Thailand. His day job is managing a factory that is creating innovative springs that store potential energy and release it to power things in this post-oil, largely post-industrial world. Climate change and the exhaustion of fossil fuels has led to the retirement of most cars and planes. Dirigibles carry goods between countries. Bicycle taxis move the rich through the city. And people like Anderson Lake look for new sources of calories that are resistant to the plant pandemics which caused mass starvation. Lake’s real job is trying to find these new plants (or genetically modified older plants) that could possibly feed more people.

Emiko is a windup girl, a product of genetic engineering. She was created in a Japanese lab. Although she looks and largely acts human, although she is intelligent and capable, she is regarded as property and many consider her to be an abomination. She works for a corrupt bar owner who uses her to entertain men, sometimes graphically and often in humiliating ways. Anderson Lake, though, is smitten with her at first glance. He quickly brings her into his bed, into his life, and into his world.

Hock Seng is a Chinese refugee from Malaysia, living in a slum in Bangkok. He works as Anderson Lake’s assistant, but his goals are set much higher. He was a man of means before religious fanatics began slaughtering the ethnic Chinese in Malaysia and he intends to be an important man once again. If his plans require betraying others, he’s OK with that.

Captain Jaidee Rojjanasukchai is one of those rare incorruptible men committed to keeping the Thai kingdom safe and whole. Part of the Environment Ministry, he does not mind making powerful enemies in the performance of his duties. Those enemies, though, are growing in number and power. A reckoning is coming, one that Jaidee is not fully prepared to handle.

The Bangkok they live in is largely separated from the rest of the world. Large portions of what we know as Thailand today are gone, drowned beneath rising seas or baked under an unrelenting sun and brutal heat or abandoned because of some pandemic affecting plants or animals or humans, or all three. Bangkok remains dry despite the rising waters. Pumps and sea walls hold the ocean away from the city, but no one is sanguine about the long term possibilities. With the Environment Ministry tackling corruption in other departments, tensions are high in the city. Only a small spark is needed to begin an open battle between Thai officials. Emiko provides that spark.

I want to avoid spoilers, so I will just leave the summary there. The Windup Girl is full of surprises. Shifting POV between characters, random and sudden violence striking very close to the protagonists, and the constant threats of pandemics and rising waters and sectarian divides keep the characters in a constant state of stress. Alliances shift, friends become enemies and enemies become friends–or at least friendlier, and racial and religious tension is never far away.

This is a book that deserves the awards and accolades it received. Reading it at a time when we are facing racial tensions and pandemic fears and global warming makes it border on prescient. The Windup Girl may not provide a roadmap to survival, but it does give some hope that humans will find a way.