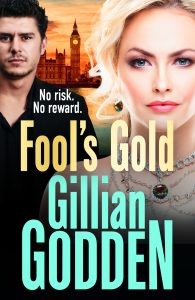 Julie and Ralph are living a storybook fantasy. She is his princess being swept away from her home in Liverpool to his castle in London. His is a rags-to-riches tale, growing up poor and half Jewish in Ireland, striking it rich in London and falling in love with his soulmate in Liverpool. Such a beautiful tale, of wishes and beauty and….

And that’s the view that the world sees. The truth, as it often is, is much darker. Julie is a survivor, willing to do anything necessary to keep going. She could not save her mother from jail or her sister from drugs, but she will fight to protect her nephew. If that means working in a brothel to afford the medical care her nephew needs, so be it.

Ralph Gold’s past may be checkered, but his present is almost entirely black. A highly placed member of Don Carlos’s mafia, Ralph seldom shows his anger. On those rare occasions when he does, though, people usually die. He is a trusted captain, able to organize crime in ways that make a few rich, a few protected, and a few dead.

Ralph and Julie meet in a previous book, and find that they are indeed soulmates. Passionately in love with each other, Ralph does indeed sweep Julie away to London. There, Don Carlos is hatching a brazen scheme that will result in more money than any of them has ever imagined. A wealthy Arab prince is coming to London to show off some jewels and sell some others. Don Carlos proposes that they steal the jewels. It is a dangerous plan, and Julie has a starring role in his plot.

Gillian Godden has written a series of mob adventures with intersecting characters. This is the second of a series featuring Ralph and Julie Gold, who are characters in several other of her novels as well. The Gold’s are a perfect mob couple. She is completely loyal to, passionately in love with, and ferociously protective of her husband. He feels the same way about her. She is his eyes and ears, letting him know when parts of his empire are struggling. He is raw power, raising some and ending others. Both are brilliant and ruthless, willing to kill when necessary. When your business involves racketeering and extortion, guns and drugs, theft and money laundering, killing is necessary more often than for your average grocer or clerk.

As the couple plans both their wedding and the heist of the century, the action gets hotter and hotter with each page. Given the extravagance of their wedding, though, they may need the success of the robbery to bankroll the nuptials. One thing is for sure: the Golds’ activities both known and unknown will be talked about for years.

Our thanks to Rachel Gilbey of Rachel’s Random Resources for our copy of Fool’s Gold, given solely in exchange for our review. The opinions here are solely those of Scintilla. For other perspectives on this novel, check out the other bloggers on this tour.