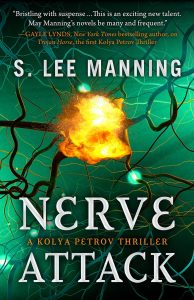 Kolya Petrov is done. Out of the spy game. The US agency he worked for, the ECA, had allowed him to be captured and tortured and worse, much worse, they had allowed his fiancee to be captured as well. His leg still injured, PTSD still haunting his sleep, he has left the ECA and settled into life as a corporate lawyer.

But, Alex is not worried about him getting killed filing briefs, he is not tempted daily to strangle the ECA director, and with perhaps too much help from vodka he is making do. That is, until the spy game comes back after him. Three men invade the home of Alex’s family during a family get together, holding everyone hostage while searching for Petrov. He kills two of them though the third one escapes, and has to call the ECA for help convincing local cops that this was not a drug deal gone bad.

Then, the ECA comes to him. His childhood friend Dmitri has been asked to help the CIA find his old employer. Someone, believed to be Dmitri’s boss, has smuggled a particularly deadly chemical weapon into the US. It has already killed several people and the threat is that thousands more are at risk. The only person Dmitri trusts in the US is Kolya, and regardless of the deal he is offered he will not accept it unless Kolya assures him it is legitimate. Given the urgency of the situation, Petrov agrees to help so long as Alex is given a bodyguard and taken out of Washington.

We are not even through one-fifth of this book yet, and already you can tell it is going to be an exciting and whirlwind plot. From Washington to St. Petersburg, Moscow to Vermont, Kolya and the ECA agents race to foil the plot and find out who is behind it. Alex doesn’t just sit quietly in hiding, either. She and her bodyguard face capture or death, and don’t hesitate to act when the need arises.

I have not (yet) read the first book of this series. I now feel like I must. These are likable characters involved in a constantly evolving scenario. The twists and surprises continue almost to the last chapter. Manning has contrived a fun and fast-paced adventure that also raises questions about old sins and trusted friends. Dmitri’s personal motto is “Never trust anyone completely.” Time and time again that motto plays out in this book.

S. Lee Manning’s Nerve Attack has all of the over-the-top twists of writers like Clancy and Balducci. The women in her book, though, are just as badass as the men (a major flaw in Clancy’s books and some of the writers who succeeded him). For readers who like this sort of high-stakes spy thriller, this is an excellent addition to the bookshelf. 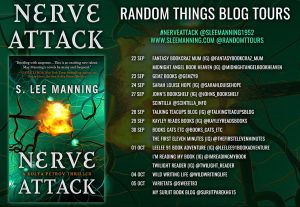 Our thanks to Ann Cater of Random Things Blog Tours for our copy of Nerve Attack (and special thanks to the author and the publisher for sending us a paperback copy!), given solely in exchange for our honest review. The opinions here are solely those of Scintilla. For other perspectives on this book, check out the other bloggers participating in this tour.