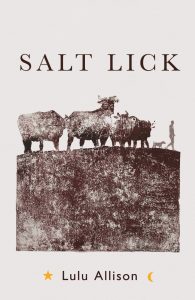 Salt Lick is one of those books that sneaks up on you. The story starts in a dystopian future England, following the exploits of a boy named Jesse. Jesse lives in a very small village with his parents. The U.K. has broken up. Most people live in cities. Only a brave few are willing to face the challenges and deprivations of country life. The land is damaged from seas encroaching previously fertile land, The population is decimated by pandemic. Climate change has made the weather unpredictable. The supply chains are broken or at least severely damaged, the infrastructure is in poor repair, police presence is concentrated in the major cities and is more focused on quelling dissent than on preventing crime.

Jesse is a mostly solitary boy. There are few other children in the village. One of his friends succumbed to a plague, another boy his age is different enough from Jesse that their friendship is more one of desperation than affinity. We follow Jesse for some time as he finds and adopts a puppy, as his parents wrestle with continuing life in the village or giving up as most others have and moving to London, as he faces challenges within his heart and his family and his community that are not too dissimilar from those faced by other teenagers around the world.

Occasionally a Greek chorus will interject with a poetic commentary on the situation, on the boy’s feelings, on the dog, on the community, etc. This chorus has a close view on Jesse’s life, in fact, they live around his village. They are cows. Feral cows. I’ll admit, I never expected poetic cows to figure into a novel I was reviewing, but here we are. (And they are actually quite good observers with surprising insight into the world and the human condition.)

The story then turns to a city dweller named Isolde. She is struggling with the end of a relationship, trying to figure out who she is and what she should do next. Her life was marked by a tragic event from very early childhood: a domestic terrorist’s bomb killed her mother and grievously wounded her. As a victim of a terrible crime, she has the legal right to view and interact with the man jailed for the attack. She has never done so before, but since she is trying to start over she decides to go as far back as she can and try to figure out more about her mother. Going to see her mother’s killer seems to make sense.

The terrorist is not what she expected, and he starts her on a journey to learn more. Subsequent chapters follow Jesse’s and Isolde’s different journeys, and the story picks up pace as it develops. Several of the twists caught me by surprise. Lulu Allison connects the stories of these two wanderers in ways that led me to reconsider chapters I had already read in the light of the new information. When an author can make me see what I thought I understood in an entirely different light, I consider that a win for both the reader and the writer.

Salt Lick is a deep and thoughtful novel. It does take some patience to let the stories develop. That patience is richly rewarded by the end. And let’s be honest: you just don’t find a lot of feral cows composing poetry in literature or in life. If you are looking for a fascinating and ultimately hopeful look at a broken world, especially one with a literally pastoral (pastural?) Greek chorus, this is a great book to add to your library. 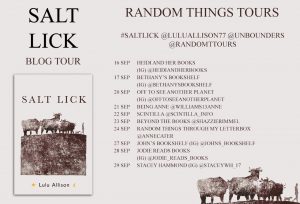 Our thanks to Anne Cater of Random Things Blog Tours for our copy of Salt Lick, given solely in exchange for our honest review. The opinions here are solely those of Scintilla. For other perspectives on this novel, check out the other bloggers on this tour.