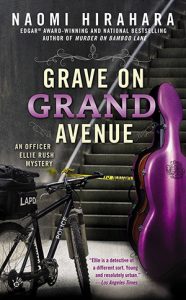 Ellie Rush would love to follow her aunt’s footsteps and move up in the LAPD hierarchy. She does not want her aunt to help. She intends to do it on her own. She has her eye on becoming a homicide detective before she turns 30.

That goal can seem impossible when you are a rookie bicycle cop, Still, Rush knows hard work and avoiding unnecessary drama will eventually pay off.

Unnecessary drama like your best friend becoming a journalist and publishing stories that hint at having an inside LAPD source. Or drama like having your previously unknown grandfather show up at your house and finding out he has a checkered past.

It is considered rude to speculate on a person’s age, but I think it is fair to say that Naomi Hirahara is not the same age as her young 20s character. Despite that generational difference, Hirahara has delightfully captured the voice and mannerisms of a millennial. Rush is less into social media than many of her peers, but she is fully aware of it. Tightly connected to her cell phone, tightly connected to a close group of friends, she is clever, blunt, loyal, and deeply committed to her job, her family, and her chihuahua.

And if things worked out for her to become more tightly connected to a certain handsome detective, well, that might be ok, too.

Grave on Grand Avenue is fun, smart, and engaging. Ellie Rush is a wonderful character and Naomi Hirahara does an excellent job with bringing multiple plot strands together into a cohesive whole. The more I read by this author, the more I want to read from her.