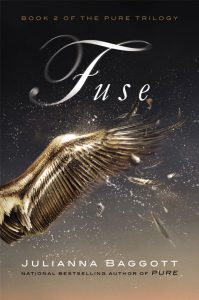 Fuse. In the dystopian future created by Julianna Baggott in the book Pure, people caught outside the Dome during the detonations of atomic bombs and nanoparticles became fused with whatever they were nearest. Mothers fused to their children. Strangers standing near each other fused together. Others fused with trees, or dirt, or bicycles.

There is another meaning of the word “fuse.” It is the trigger for an explosion. One lights a fuse to set off a bomb. That may also be another meaning behind the title of this book.

Pressia and Bradwell are working together to figure out the mysteries of the past. Bradwell is hoping to finish the work his parents started and bring down the Dome. Pressia is hoping to figure out some way to make the lives of those outside the Dome better. Although they have aligned interests, sometimes their different goals bring them into conflict.

Partridge and Lyda are being protected by the Mothers (a group of women who fused to their children). Although they are mostly separated, they are each realizing how important the other is.

Then, the Dome strikes. First, a girl is released outside. She looks like a Pure, a child of the Dome. She is not. She has been “healed” of the scars and fusions. That healing has come with a terrible cost, though. She has a message for the people outside the Dome. They must return Partridge to the Dome or people will start dying.

Then a massive wave of robotic spiders is released from the Dome. They attach themselves to people and begin timers that count down. When the timers reach zero, the spiders explode. Another fuse lit.

If Partridge surrenders, what happens to Lyda? Will the spiders stop exploding? Can Partridge just go back and resume his privileged life in the Dome? Can Pressia and Bradwell find the answers they need? These are among the questions that propel Fuse through a very compelling plot.

Julianna Baggott writes with a vivid imagination and a clear vision. Her world is frightening and unpredictable. Love is possible, but it is always dangerous. Friends and allies can be found but they always have their own agendas. Understanding the past may help you seize the future, but it may also distract you from the present. Still, as more than one character observes, sometimes you have to be willing to sacrifice yourself for the sake of the future you hope to achieve.