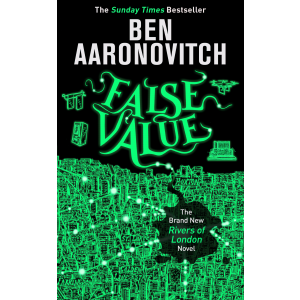 Peter Grant has been dismissed from the Metropolitan Police, his connections to “the Folly” (the branch devoted to the fae, supernatural, magical, and generally weird) cut off, and with twins on the way he must find a new job. A high tech firm is looking for a security expert. Led by an expat Australian who came to London after becoming a billionaire in Silicon Valley, Grant is hired to find a “rat” who has been trying to break into some of the firm’s most secret and secure areas.

OK, almost none of the previous paragraph is true. DCI Grant, an apprentice wizard under the tutelage of DI Nightingale, was briefly suspended while his role in the death of a suspect was investigated. However, there were suspicions of shenanigans afoot in the tech world, and someone with magical experience needed to go undercover. Create a social media backstory that embellishes the facts, use the actual pregnancy of Grant’s girlfriend (the goddess of one of the local rivers) to enhance his need for a salary, and Grant finds himself in the erstwhile employ of suspect number one.

Rivers of London is one of the most delightful urban fantasy series going on. I am not sure what it is about that sub-genre (or maybe it’s just the authors I’m attracted to), but a delightful sense of humor seems to be a requirement for getting published. Or at least making it into a Scintilla review. Grant is a serious policeman and a serious wizard. But he is not above telling his girlfriend Beverly that the reason he fell in love with her was her knees or calling his prenatal babies collectively “the Bulge.” The book is full of his ironic and sardonic observations, usually one-liners, about life, magic, other people, and London itself. There are times when I chortle and have to reread a line again, wishing I had used it myself (or looking for the opportunity–my wife has very nice knees, too).

Along with many of the ongoing characters within the series, we are introduced to an American group involved with keeping a lid on magical use in the ordinary world. Much to my delight, these are not police officers. The Americans use librarians. Specifically, a secret branch of the NY Public Library, housed in the iconic Manhattan building guarded by the stone lions Patience and Fortitude. These librarians do not play well with others, are not necessarily quiet or bookish, and generally annoy the London officers who are doing their own jobs. One of them, though, does wear glasses and has perfected the “librarian’s glare,” so there is that.

As Grant continues to improve his spells, grow in his skills, and face the challenges of fatherhood, his character also grows wiser and funnier. When he is able to incorporate dad-jokes into spell casting, I think we can all assume that the streets of London will be perfectly safe from whatever supernatural dangers may arise.

Or at least we can chuckle at his attempts to hold them at bay and hope that no architecturally historic buildings are destroyed in the protection of the ordinary citizenry.