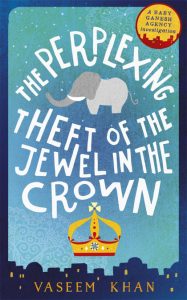 Inspector Chopra (ret’d) has decided that a nice relaxing trip to the museum is just what his wife would like. He has decided this because his wife, Poppy, had mentioned it. Many times. Enough times that even the Inspector had realized that he may as well bow to the inevitable and take her to the museum. The display was a once in a lifetime opportunity: the crown jewels of Britain. Most significantly to all Indians was the crown itself which featured the Koh-i-Noor diamond. The diamond had been presented to the British during the Raj era–if it can be truly said that a subjugated people “presented” anything willingly to their colonial masters. Many Indians argued that it was stolen by the British and wanted it returned to their country permanently.

The crown is stolen and suspicion falls on a police officer who had been part of the security team. An old colleague of Chopra’s, he insists that he is innocent and is being framed. Despite some misgivings, Chopra takes the case.

Another theft also demands his attention. A bust of a Catholic priest has been stolen from the exclusive school where Poppy teaches. Although Chopra feels that the Koh-i-Noor diamond may be a higher priority, Poppy insists that this case be given attention as well. Fortunately for Chopra, his long-time assistant in the police department has become available. Rangwalla is a solid detective, completely loyal to Chopra, and eager to take on new challenges.

The critical third member of the team, the elephant Ganesha, has his own matters to deal with. When children tie firecrackers to his tail, he chases one of the culprits up a tree. The matter is reported to animal control and an officer begins to cause trouble. In addition, the orphan Irfan, Ganesha’s friend and Chopra and Poppy’s ward, is taken away by a man claiming to be his father. Add that to helping Chopra find the diamond and going undercover as a circus elephant. Ganesha is up to his trunk in trouble.

Khan puts together likable characters, human and elephant, in a gentle but riveting set of interconnected stories. Inspector Chopra (ret’d) is an honest man who sometimes despairs of the corruption and graft that hurts his country and especially his home in Mumbai. He uses the wisdom of his father and the words of Gandhi as guides, follows his own unerring moral compass, and sometimes listens to his wife. That, and the timely intervention of a plucky and extraordinarily helpful baby elephant, helps him solve crimes and shine as a beacon of hope and light in Mumbai.

None of this, however, helps him with his mother-in-law.