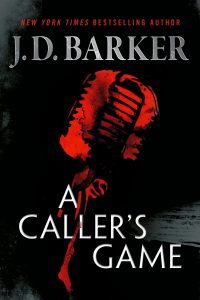 Jordan Briggs is a fast-talking, brash, aggressive radio host with one of the top shows on satellite radio. She is combative, arrogant, and dismissive of her callers, her staff, her bosses, her (now ex) husband, and anyone else she meets. Her marriage lies in ruins, she has not spoken to her mother in 15 years. The only person she allows into her heart is her daughter, Charlotte.

Then Bernie calls the show. Bernie is quiet, yet for some reason compelling. Jordan is not sure why, but she lets him play a game with her. She gets to choose: Uber or taxi.

Her choice opens the door to hell on New York City. Bernie is not just any caller. He is a man with a deep grudge against Jordan, a man who is quite willing to let his revenge against her flow over to affect the entire city. Soon, it becomes apparent that in this game almost everyone will be a loser–and for many, the stakes will be their lives.

A Caller’s Game has been described as “Die Hard meets Talk Radio.” I am not sure I could come up with a better analogy. J.D. Barker is a master at the thriller that is also a borderline horror novel. After devastating Chicago with his “4th Monkey” trilogy, he now sets his sights on New York City. Terrorists, explosions, knives, guns, hostages. Nothing is safe from his imagination. The plot is certainly over-the-top, but somehow Barker makes it believable. It is a high-speed novel full of action, suspense, terror, and enough bodies to make a war film take note.

Study after study shows that people actually like spoilers. I try to avoid giving them in reviews, because people (yes, probably you) believe they don’t want spoilers. They are wrong. A game may be more exciting when you don’t know the outcome…but it is more satisfying when you do. People re-read favorite novels, not because they don’t know the ending but because they do. Reruns on TV. Multiple trips to the theater. Our brains may think we don’t like spoilers, but our behavior disagrees.

Good thrillers are hardly predictable. They are also highly predictable. That combination is what makes them so good. Readers go in, knowing that there will be danger and action and good and evil and bodies and complex criminals and multifaceted plots. And did I mention the bodies? The way we get all of these things varies greatly and the plot is full of twists and surprises. But in the end, we get what we expected and because we get what we expected we come back for more. J.D. Barker is one of those authors who knows when to surprise and when to meet expectations. His books always deliver the expected, but wrap it in unexpected packages.