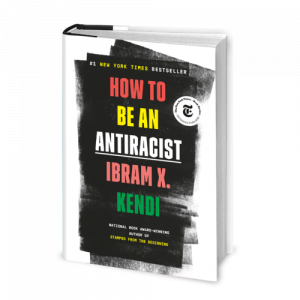 Nonfiction: How to Be an Anti-Racist, Ibram X. Kendi

I thought How to Be an Anti-Racist was written for me. I want to be an anti-racist. I consider myself an ally, I try to see things through the eyes of others, I value the changes in my life from my relationships with people different than I am. But I was not entirely right. Ibram X. Kendi wrote this book for himself, in the hopes that people like me would benefit from it as well.

Don’t get me wrong: this book is for everyone. Or at least it should be. Kendi pulls no punches in calling out racism in various iterations. But much of the book is devoted to calling out himself, to exposing the racism he held in his own heart, to vulnerably admitting that he is a product and victim and participant in racist systems. His strongest denunciations are aimed at the only person he has the power to change: himself.

White people (and I am as white as they come!) like to say stupid things like “I don’t have a racist bone in my body” or “I don’t see color, I see people.” Kendi is right in saying this is ridiculous. (I will admit to having used those statements myself years ago.) If we don’t see color, we don’t see people. If you don’t have a racist bone in your body, you may be an invertebrate. Racism is baked into the American system. Whether the subject is schools or businesses, politics or policies, neighborhoods or churches, police shootings or mass incarceration, racism underpins every facet of our society. Our founding fathers gave us many brilliant ideals worth upholding. But they also built this country on the foundation of genocide, ethnic cleansing, slave labor, and seized property. Denying the ongoing impact of those decisions and pretending that everything got fixed in the 1960s civil rights era is turning a blind eye to history.

But this is NOT a book decrying white people. Unlike many African Americans, Kendi argues that black people can be racist, too. Their racism is sometimes expressed as hatred or fear of whites. Sometimes it is directed at other blacks. Kendi argues that this sort of racism is no more justifiable or logical than the more familiar kind directed from whites to blacks, and in fact cedes power to whites rather than embracing one’s own agency.

This is a book that must be read with an open mind and an open heart. Kendi is appealing to our shared humanity to achieve a society better than we can imagine today. We owe it to ourselves to listen and learn.