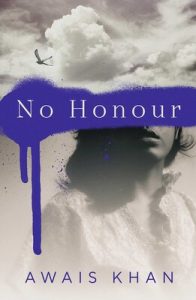 No Honour grabs your heart and your throat on the very first page. A young girl has secretly given birth in a small Pakistani village. Betrothed to a much older man, he had seduced her before their marriage and impregnated her. Then, he left. After the baby came, her own brother led her to the village center. There he first drowned her baby in a bucket of milk. He then cast his sister into the depths of the river.

This sets the tone for this modern-day story about a girl, Abida, and her father Jamil. They live just outside the village. They knew the girl. They fear the anger of the local “pir.” He holds both civic and religious roles, guarding the morals of the community and particularly those of its women and girls with a ferocious temper and an iron fist. Minor infractions lead to beatings. Major infractions lead to death.

Despite this pressure to conform to the local religious expectations, Abida falls in love. Kamil promises to marry her. Before he can do this, though, Abida gets pregnant.

I don’t want to give away too many spoilers. It is easy to recognize that there will be an accounting within the village. Abida survives this and she and Kamil marry and flee to Lahore…where almost anything that can go wrong does.

Do not think this is a novel bashing Pakistan. The author himself lives in Lahore. His characters are deep, complex, and nuanced. Abida is by turns brilliant and naive, bold and timid, sweet and cruel. She is a victim. She is also a survivor.

When it comes to family, both of them discover that they will go farther than they ever imagined possible.

Awais Khan reveals a Pakistan full of painful contrasts. Many rural villages still condone marrying off very young girls to men who are often much older. Educating women is considered a waste, a travesty, immoral, pointless. Sex outside of marriage can be a death sentence for a woman but seldom carries any penalties for the men. In cities like Lahore, women may fare better. But, they may also be sold into sexual slavery, forced into loveless marriages with powerful men, unable or afraid to stand up for themselves or leave their situations. Laws prohibit extrajudicial killings, slavery, etc. Laws are only as powerful as a society’s willingness to enforce them. Old habits die hard, old traditions do not willingly transition to new ways, and money and drugs give power to thugs and thieves. Khan does not flinch from describing his country’s problems. He does, though, leave readers with a note of hope that if individuals are willing to go far enough, they can find honor for themselves and their people. 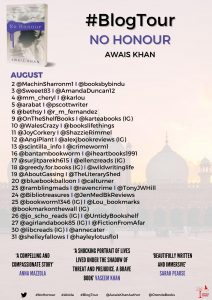 Our thanks to Anne Cater of Random Things Blog Tours for our copy of No Honour, given in exchange for our review. The opinions here are solely those of Scintilla. For other perspectives on this book, check out the other bloggers on this tour.

One thought on “Blog Tour: No Honour, Awais Khan”