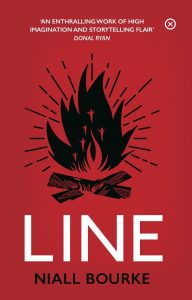 What if your entire life was spent in line? For months at a time the line remains still. Then, without warning, it moves and you must pack up everything you own and move with it. Eventually there is a reward at the end of the line, according to everyone. Myth? Legend? Fact? Who knows–you have been with this group of people in the line since you were born and your parents were here before you and your grandparents before them. All you know for sure is the line.

That is the premise of Niall Bourke’s spare and stark novel. Line is brilliant. Bourke’s use of short chapters and crisp descriptions drives home the emptiness of the lives endured by the characters in the book.

Willard shares a tent with his mother. She is worn down by age and the journey, so Willard must handle things like putting up the stove pipe through the top of the tent, removing water from the tent after rain falls, collecting firewood and retrieving rations from the occasional boxes that mysteriously arrive.

Nyla loves Willard. She has twice become pregnant with their child, and twice miscarried. Still, she loves Willard and Willard loves her. She may even be willing to marry Willard, even though his place in the line is behind hers. This would mean she would move down and live with Willard and his mother, because you can never skip ahead in the line.

When Willard’s mother dies, he begins questioning his reality. Is it truly possible there is nothing besides the line? How is that even conceivable? What if someone did leave and was not caught? Would death by rock bears truly be a worse fate than continuing to queue for an unknown destination with an unknown reward? He and Nyla decide to find out.

What follows is disturbing and shocking at every turn. Willard and Nyla do find something beyond the line. Once there, though, they face a choice that resonated deeply with me. Sometimes finding the answers to your questions does not bring peace. Sometimes there is pain with every turn, and the only way forward leads to despair.

To call this dystopian really sells it short. I am not sure what lies beyond dystopia, but this book has left that line and ventured out to find it. Despite the very dark nature of the book, though, it is well worth the read. It is thoughtful and deep, exploring themes of meaning and meaninglessness, of losing one’s soul to gain a measure of peace, of facing impossible choices and a trial where every decision is wrong and will hurt. This is not a novel that will make you feel good. It is a novel that will make you appreciate the blessings you have, regardless of how small they may appear to be. 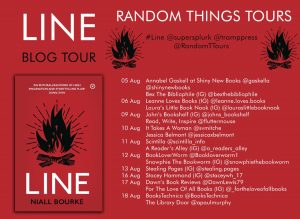 Our thanks to Anne Cater of Random Things Blog Tours for our copy of Line, given in exchange for our review. The opinions here are solely those of Scintilla. For other perspectives on this novel, check out the other bloggers on this tour.