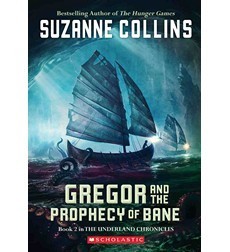 New York teenager Gregor has successfully returned from the Underland with his toddler sister Boots after rescuing their father from his captivity at the paws of giant rats. After his return, his mother went to the laundry room in their basement and boarded up the portal there to the Underland. And so Gregor assumed his days of traveling below were over.

That assumption does not take into account the imagination of author Suzanne Collins. Boots and Gregor are sledding in Central Park when Gregor takes his eyes off of her for just a minute or two. In that time, Boots disappears. A rock has been displaced and a giant roach leg lies in the snow near a small red mitten. Boots’s mitten. Gregor knows that the giant roaches of the Underland consider Boots a princess, but he does not know why they might have taken her. So, of course, he follows the trail down the hole and into the Underland once again.

There he learns about the prophecy of Bane. Bane is a giant white rat, a giant among the giants, maybe 10 feet tall and pure white. The prophecy indicates that a warrior will kill it unless the child the warrior loves is killed first. After Gregor fulfilled a prophecy during his first trip to Underland, all of the denizens, rats, roaches, people, bats, and many other species, recognized him as the prophesied warrior–and his little sister as the child whose life would make the difference. The rats are determined to kill Boots in order to protect their Bane. The roaches are determined to protect their princess at any cost. And the people are eager to send Gregor back on a quest to save the Underland from the rampaging rodents.

This middle-grade fantasy is fun. Pure, escapist, fun. Gregor is a likably imperfect teenager, paired with an outcast bat, a rebellious princess, a super-powered rat, a devoted cockroach who needs a life jacket, a royal cousin, and some really obnoxious fireflies. They traverse an underground sea, find a previously unknown island, and face dangers ranging from the tiny to the giant. And when Gregor finally confronts the Bane, the choices he makes will transform the course of every species in Underland.

Collins may be better known for another series, but this earlier series for a younger audience should not be neglected. You can see some of the same themes developing that show up in her later and more famous work, but the execution of those themes is quite different here. Younger readers will enjoy the adventures, the interesting camaraderie and rivalry between the characters, and the delightful take on giant talking creatures (who wouldn’t fall for a giant talking cockroach who gives rides to a toddler girl he considers a princess?). And older readers will like the growth and development of the characters and cheer for the underdog from the Overland.