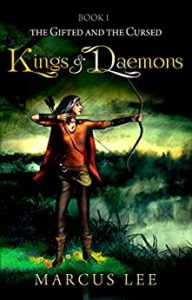 Fantasy: Kings and Daemons, The Gifted and the Cursed Trilogy Book 1, Marcus Lee

Kings and Daemons is a sprawling fantasy set in a world where magic is real but rare, “gifted” children are sent to the Witch King who either conscripts them into service or, if they are unwilling, kills them. The land is dying, though, and very few know why. The peasants are starving, the crops are failing, the waters are rotting, and blight is obvious throughout the lands ruled by the Witch King.

The next door kingdom of merchants and traders is blamed for poisoning the land, and the Witch King is preparing for war. The little food yielded by the fields is being shipped directly to the capital for the army. Blacksmiths have turned from forging tools to forging weapons. Soldiers are hated by most of the people, but they are one of the few groups guaranteed to eat and their numbers continue to grow.

Maya is a gifted young woman who managed to reach her teens without the king’s knowledge of her powers. She is a healer. Her touch can cure illness, mend wounds, and save lives. Her very presence gives health to land and water, allowing them to flourish even in the midst of the blight that afflicts the rest of the land. But because her gifts are so strong, she can only express them in secret. Revelation of that secret could destroy her.

Taran has also escaped the king’s notice. His gift is mind reading. He uses it to win fights, knowing what his opponent intends to do and using that knowledge to avoid or inflict a blow. But when a clever soldier figures his secret out, he is left with the choice of joining the army or dying. It does not take a mind reader to guess his decision.

Kalas has grown old in the company of his wife. His dreams of dying a quiet and peaceful death are shattered, though, when a group of soldiers decides to pillage his farm and murder his wife and stepson. What they do not know is that Kalas carries a burden, one that has given him unnatural longevity and incredible fighting skill. Kalas has a daemon inside, and when the man in his horror and grief steps aside to let the daemon loose, no one can stand in the way of his revenge. With the spilling and drinking of blood, the daemon rejuvenates the body of its host, restoring him to the appearance and strength of a soldier in the prime of his life. A very few are allowed to live in order to carry one message to the Witch King: Kalas is coming.

This is a book that knows it is part of a trilogy so it can take its time to get going. Maya and Taran and Kalas are three of the major characters but there are a plethora of minor characters who get their moments in the spotlight. This is a grand and lush fantasy that is full of magic and malice, heroes and villains, and indeed, kings and daemons. I made the great mistake of starting to read this book in the evening.

I finished it at 2:30 a.m. On a work day. That sort of thing was much easier when I was 25 than it is now that I am 55. If you’re going to start it in the evening, do it before a weekend or holiday!

There is a cost to staying up late to finish a good book. The next day is long and slow and your head is fuzzy and your temper is a bit frayed. One emphasis begun in this book and hopefully fleshed out in future books is the cost of magic in this world. Certain people have gifts: healing, mind reading, etc. But those gifts come with a cost, one which Maya has already begun to pay by the end of the novel. Whatever the ultimate outcome is against the Witch King, it is certain that no one involved will survive unchanged.

Marcus Lee writes like someone who loves the genre. He does not wander far from long established tropes: a ragged band of fugitives with magic and heart take on the forces of evil against all odds. Oh, and there are giants. But he infuses these tropes with a clear writing style and powerful descriptions and complex characters who fight battles of good and evil as much within themselves as they do with each other. I found myself sucked into the story, eager to see the results of the quest, and disappointed that I will have to wait for the next book to see what happens to these characters next.

Admittedly, though, it’s a good thing it ended when I did, or I might have had to take a vacation day. 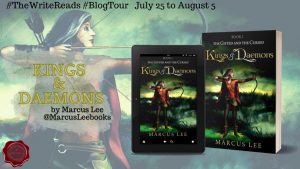 Our thanks to the folks at The Write Reads Blog Tours for our copy of Kings and Daemons, given in exchange for our honest review. The opinions here are solely those of Scintilla. You can get other perspectives on this novel by checking out the other reviewers on the tour.