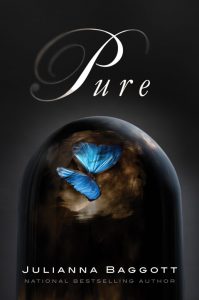 Pressia lives with her grandfather in the ruins of a barbershop. Several years after the “detonations,” nuclear bombs and nanotechnology attacks that transformed the earth, most people live in squalor and terror. The combination of the radiation and the nanobots has changed almost all of the survivors. They have fused together with whatever–or whomever–was nearest to them at the time of the explosions. Pressia was holding a doll in one hand. Her hand is now gone, and the doll’s head now forms the end of her arm.

When teenagers reach their sixteenth birthday they are forcibly conscripted into the military. Most are never seen again. Rumors are that those who are not fit to fight serve as target practice for those who are. Some rumors are actually true. And Pressia is about to turn 16.

Partridge is a little older and is living a life as different from Pressia’s as can be imagined. He grew up in the Dome, a protective shell that shielded the inhabitants from the effects of the detonations. This makes him a “Pure,” someone who has not fused with an object, an animal, a plant, or another person. However the residents of the Dome are engaging in their own scientific enhancements, changing the DNA coding of teenage boys to improve their senses, their speed, their stamina, and their strength. Partridge’s father is one of the leaders of the Dome, actually the leader of the leaders. The fact that his own son is resistant to the coding is a matter of conflict between the two of them.

Partridge grew up believing his mother was dead. When his father accidentally refers to her in the present tense, he realizes that she may still be alive and living outside the Dome. Partridge determines to escape the Dome and find her.

Pressia and Partridge are obviously destined to find one another. When they do, though, everything begins to change. The things each believed were true are challenged. Allies come from unexpected places. Enemies use surprising tactics. And the two of them discover that their connection is deeper than either of them could have imagined.

Author Julianna Baggott has crafted a very complicated world filled with monsters of our own nightmares. One character is fused to his little brother, forever a child living on the back of his brother and feeding almost parasitically off him. Mothers are fused to their children. One character is fused to three small birds on his back. Fusing does not just happen between living beings. Pressia’s grandfather has a small fan in his throat, forcing air into his lungs. Other characters have glass or metal embedded within them. Barely maintaining any humanity are “dusts,” fusions between sand or dust and people which rise from the ground to capture and likely consume others.

In this surreal world inhabited by Picasso images come to life, Pressia and Partridge find a common purpose and recognize in each other a fellow traveler. Finding allies along their journey, they seek Partridge’s mother and uncover more secrets than they ever imagined existed. Pure is a story of survival and discovery, where characters learn that the truest transformations are those that happen within a person’s heart.