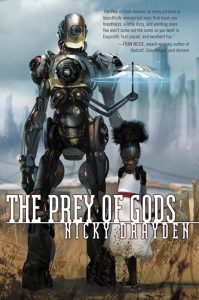 In a near future South Africa, old wars against new in unexpected ways. Old men cling to the rituals they credit with marking their own journeys into manhood, much to the dismay of a teenage boy facing his own circumcision at the edge of a spear. Townships without running water in homes have computer-controlled wells for public access. Most people enjoy the use of accompanying bots that can provide information and perform basic tasks. Still, race and class distinctions guide social interactions, prejudice against gay and trans people is still rampant, and the old gods may be weakened but they are not gone.

Nicky Drayden is an American and she freely admits that although her story may borrow from the cultural traditions and landscape of a country she has visited, it should not be understood as a “South African story.” That does not change the fact that it is an excellent story. As new gods and demigods become aware of their power, as sentience begins to rise within the ubiquitous bots, as old gods use new means to reclaim old powers and new gods use old and new ways to grow into their own, we see that people are people–maybe most especially when they are not quite human.

The gods of Drayden’s book are powerful but cruel. The “good” gods are capable of visiting violent and devastating mayhem on an entire city in a matter of moments. They use and manipulate their friends, they sometimes require sacrifice and death to increase or maintain their power. They are “good” because despite their flaws, they think of others as well as thinking of themselves. There is a clear distinction between the good and the evil–but for those caught in the crossfire the differences are hard to appreciate.

Ultimately, we are all The Prey of the Gods.