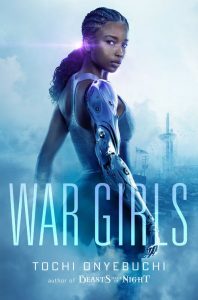 War Girls is one of those books that is categorized YA but I think should be approached with caution by parents and younger readers. It is an excellent book, very powerful and compelling. It is also violent and unflinching in its view of war. War itself is cruel and brutal and bloody. When the battles are fought by child soldiers, somehow it is much worse.

Onyii and Ife live in a camp for female child soldiers. Onyii has raised Ife in the camp for years, getting some help from an android they built and programmed themselves. Set in a future civil war between Nigeria and a breakaway state of Biafra, Africa has been devastated by fallout from nuclear wars between other countries and the ongoing effects of climate change. Large swaths of territory are uninhabitable, stalked by mutated creatures that have paid the price for radiation exposure in their DNA. Onyii fights for Biafran independence. Ife is too young to fight, but she uses her tech genius to support her sister in battle.

Then their camp is discovered by the Nigerian army. Ife is captured and taken north. Onyii believes her to be dead, and begins a one-woman/girl campaign to make Nigeria pay for killing her sister. But old sins and hidden truths have a nasty way of revealing themselves at the worst possible time, and when the sisters reunite they are on very different paths.

Tochi Onyebuchi explores a lot of themes in this book. The legacy of colonial boundaries that created countries irrespective of ancient tribal and cultural affinities. The use of child soldiers in war. Forgiveness and revenge. Slavery. Technology and genetic engineering. Never, though, do these deeper themes get in the way of telling a very good story. Onyii and Ife are both intriguing and well-written characters. Other characters, human and otherwise, clearly also have a deep backstory that may never be fully revealed but gives a holistic sense to their presence in the book.

War Girls is bleak in many regards. Death stalks the child soldiers, death they give and death they receive. Still, there is some encouragement that in the midst of the darkness, love and compassion remain possible, forgiveness is sometimes available, and hope carries us further than we might ever anticipate.