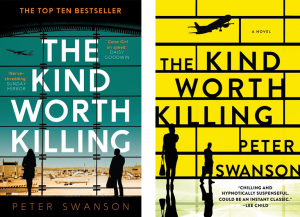 Some books should not be started in the evening, especially not the evening before a workday. The Kind Worth Killing is not a “start in the evening” sort of book. First, it has a fast paced intensity that builds throughout. The tension starts in the very beginning, when Ted meets Lily in a bar at Heathrow Airport. Both are waiting for their flight to Boston. Ted is a dot.com millionaire, married to a woman who is cheating on him. Lily is an archivist for a university. As they talk, Ted opens up about his anger at his wife and mentions that he would like to kill her.

Just like that we are swept into a plot that is both brand new and years old. Ted is new to the world of murder. Lily, though, has experience. Through flashbacks to Lily’s childhood and college years, we see how she developed into someone willing to remove the world of a certain kind of people, the “kind worth killing.” For her own reasons, reasons which become clear during the course of the novel, she has decided that Ted’s wife and her lover are that kind of people.

Peter Swanson is not one to offer just a straightforward plot. Lily and Ted’s plot gets swept into the machinations of other characters, and Swanson completely changes course partway through the book–and does not stop with just one shocking turn. Even to the last page, revelations and surprises jump out at the reader. The ending left me breathless.

Like a said, not an evening book. This is not a book where I could read one or two chapters then put it down. I became completely enthralled in Lily and Ted’s stories, then as the plot twisted and other characters became more prominent, I continued to turn page after page after page. Then, when I was done reading, my mind continued playing through the events I had just read. Peter Swanson took a night of sleep from me but it was more than a fair trade for the enjoyment I gained from this powerful and gripping novel.

Mystery and thriller fans will find The Kind Worth Killing is the kind of book that takes root in their minds and continues to grow even after the final page is turned. It is an amazing and chilling book. I highly recommend it…just, don’t start it in the evening.