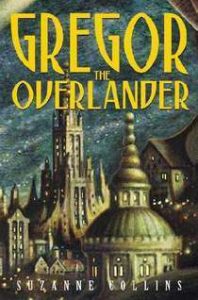 Gregor is eleven years old, living in a New York City apartment with his mother, grandmother, and two younger sisters. Forced to grow up quickly after the disappearance of his father, he helps his family by doing chores and watching his toddler sister, nicknamed “Boots,” during the summer while his mother works.

When Gregor and Boots are doing laundry in their building’s basement, Boots suddenly disappears through an open hole in the laundry room. Immediately, Gregor follows her into the hole. What follows is an adventure written for tweens but also engaging for those of us whose tween years are far behind us.

Gregor and Boots survive their fall and arrive in the Underland, a strange world existing far below NYC with talking cockroaches the size of ponies, bats large enough to ride on, rats the size of an adult man, spiders that might talk to you–or might eat you, and humans who found a way to survive in this vastly different environment than the one on the surface. What Gregor could not possibly have prepared for, even had he suspected the existence of such a place, is that his coming was foretold in a prophecy–and that this unexpected place held the object of his greatest longing.

Suzanne Collins is more well known today for her young adult series The Hunger Games (and the movies based on the books). Before Katniss Everdeen, though, Gregor was making his way through a dangerous and challenging world, befriending royalty, pursuing quests, and fulfilling prophecies. Unlike the protagonists of many other fantasy series, Gregor is an urban youth from a disadvantaged socioeconomic background. His skills were developed in the crucible of crowded schools, high-rise apartments, and public transportation. In other words, he was nobody’s idea of a hero until he had to become one.

The Underland is richly imagined, creatively populated, and intentionally reflective of modern society. Suzanne Collins may have struck a literary gold mine with The Hunger Games, but in Gregor the Overlander she has definitely found a rich vein for a different audience.