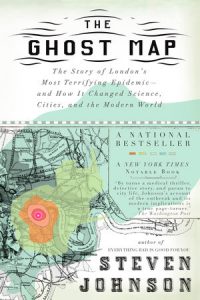 During the summer of 1854 a cholera outbreak threatened to devastate London. In particular, London’s Soho neighborhood lost many of its residents. Entire households were found dead. Yet from the ashes of this destruction rose a phoenix of discovery that transformed the world. In may ways, the birth of epidemiology can be traced to the tragic events of this epidemic.

Contemporary chroniclers of 19th Century London all agree on one central fact of life: the city stank. London had rapidly grown to become the largest city the world had ever seen. More than two million people were crowded around the banks of the Thames. WIth that many people packed into a relatively small area, the causes of the stench were varied and vile. Animals, including pigs and cows and chickens and horses, were common throughout the city. Industries (such as slaughterhouses for those animals) were next door to homes. Graveyards were literally overflowing; gravediggers were known to jump on fresh bodies in order to press them down into the decomposing corpses below them. And almost every home had its own cesspool, though not every home could afford (or was willing to pay for) those who collected the euphemistically named “night soil” and transported it out of the city. Therefore these cesspools often overflowed, sometimes accumulating in a home’s basement in levels measured by feet rather than inches. And the relatively new invention of the water closet meant that more “night soil” was going into the newly built sewers which emptied directly into the Thames itself.

Most physicians of the day ascribed to the “miasma” theory of disease transmission. Foul odors not only overwhelmed the sense but were thought to carry with them the most frightening contagions of the day: tuberculosis and smallpox and cholera. Thus, when people in Soho began dying from cholera, public health experts blamed the noxious air of the city. This theory carried with it more than a little of class disparagement. Although the foul air carried throughout the city, poorer areas did house more than their share of the sources of the smells.

Jon Snow, a very real physician with no known connection to the Game of Thrones character, had grave doubts about the miasma theory. Already widely known for his work with new anesthetics of ether and chloroform, so well known that he was the Queen’s anesthetist when she gave birth, he had studied a previous cholera outbreak in another part of London. He discovered that the disease did not follow the pattern one would expect from an airborne transmission. He suspected but could not prove that it might be carried in water. His writing on the subject failed to convince anyone of his theories, but he had confidence in what the evidence was telling him. When the outbreak began in Soho, the neighborhood where he lived and practiced, he was uniquely positioned to study it firsthand.

Reverend Henry Whitehead was a local priest in Soho. He lacked scientific or medical training, but he had a shepherd’s heart, a gift for observation, and an open mind. He, too, tried to find the cause of the outbreak that was devastating his parish.

Snow suspected the water supply had been contaminated in the neighborhood, but again the proof was elusive. Still, within about a week, he had enough circumstantial evidence to indicate that a single pump was the likely source. Despite their serious doubts, local officials removed the handle to the pump. Soon, the outbreak stopped.

Whitehead did not believe that the pump could have been the cause. The well had been inspected and was found to be intact. The water had been viewed through microscopes and nothing unexpected was found. (Likely a combination of the microscopes not being very powerful and the people not really knowing what they were looking for.) He spoke to the families affected by the outbreak. At first, several of them denied drinking water from that well. However, follow up conversations often revealed that a family member, usually a child, had either drunk from the well or brought home water from the well without the rest of the family knowing. Then he discovered patient zero, the first victim of cholera in the neighborhood. She was an infant whose mother had disposed of her diapers in the home’s cesspool. Excavations revealed that the cesspool had overflowed into the well. Whitehead was now convinced that his friend Jon Snow was correct.

Steven Johnson writes in an engaging manner. He incorporates an incredible amount of scientific and sociological detail into the book without being pedantic. It is written for the non-scientist in a way that lets one appreciate the genius and courage of Snow and Whitehead. Imagine, not truly knowing what caused cholera, yet visiting patients in their homes in order to provide comfort or gain information. In the midst of our own epidemic, the groundbreaking efforts of these two men seem especially valiant.

The Ghost Map tells a story from almost 170 years ago that has resonance still today. The techniques of tracking disease using statistics, maps, and interviews have been refined over the years, but the core practices still show their roots from Snow and Whitehead’s innovations. Though Snow’s hope that cholera would be eradicated have not yet been realized, the work they pioneered has dramatically reduced its impact and has allowed for the continued urbanization of our planet. In ways both great and small, these two men transformed the world.