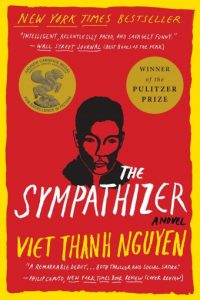 The Sympathizer is extraordinary. Considering all of the awards it won, including the Pulitzer Prize, that is hardly a revelation. Still, reading it for yourself drives home the power and emotion that earned it the many accolades it has received.

The story begins as the fall of Saigon is approaching. The narrator is a biracial captain in the secret police of South Vietnam. A senior aide to The General, he is also secretly a sympathizer of and collaborator with the communists. His handler, a childhood friend called “Man,” asks him to flee with the General and continue informing on the Vietnamese diaspora from their exile.

The story continues with their desperate escape during the last days before the collapse of both the American involvement and the regime of the south. The captain’s other childhood friend, “Bon,” a committed believer in the southern cause, loses his wife and child in the chaos. The exiles make it to Guam, then on to Los Angeles.

The captain and Bon continue working for the General in Los Angeles, and the captain continues reporting to the Vietnamese government. The story continues for several years in Los Angeles, interrupted by a brief stay in the Philippines, and then concludes with a return to Vietnam. Throughout the narrative there are characters who are given only titles: the Auteur, the Thespian, the aforementioned General, the Commandant.

The Sympathizer is one of the funniest books that did not make me laugh. It is a dark and angry humor, a gallows humor, the kind of humor that is intended to maintain a tenuous grasp on sanity in a world gone insane. In many ways it reminded me of other angry books I’ve read from other extraordinarily talented writers shining a light on their pain: Tommy Orange’s There There and Paul Beatty’s The Sellout come immediately to mind. I often thought of The Sellout while reading this book, not that they are similar in any way beyond their very biting humor and satire (and their setting in Los Angeles), but the controlled anger and the power of their prose definitely come from a common alienation and righteous sense of betrayal.

The Captain is constantly torn between competing and mutually hostile forces. He is the child of a French priest and a servant girl, not knowing who his father was for many years even as he learned his catechism from the man whose DNA he shared. He is a biracial man not accepted by his fellow Vietnamese nor by the white world of either the French or the Americans. His two childhood friends are complete opposites: one is a fellow member of the secret police, the other is his communist handler. His education makes him suspect to other communists, his position makes him despised by many other refugees, his parentage makes him defiled in the eyes of the General and his wife. If he was unable to separate himself from his dichotomies with an angry yet humorous perspective on life, he likely would be either hospitalized or imprisoned.

Told as a “confessional” to the Commandant, The Sympathizer also reminded me at times of The Screwtape Letters. Part letter, part “autobiography,” this is a book from a powerful and erudite voice telling a dark story that we Americans, especially we white Americans, need to hear. Perhaps in his sharing the darkness of his people, Viet Thanh Nguyen might give some light to the shame we bear for our own role in Vietnam and many other places around the world.