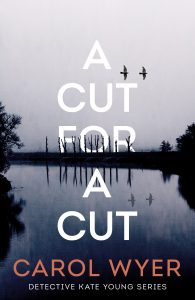 Kate Young is determined to get the man who ordered the murder of her husband. A journalist, Chris Young had been investigating corruption on the police force that involved the trafficking and sexual abuse of children. Kate was largely unaware of her husband’s investigation until after his death. He had intentionally kept her out of it since some of the officers he was investigating were in her department, were in fact her superiors. One of them, Superintendent John Dickson, is likely the man behind Chris’ murder.

She has to be extremely careful, though. Dickson is her boss’s boss. One false step and she could be reprimanded, demoted, reassigned, blacklisted, or fired. He cannot find out she is investigating him. And she must make certain that she stays fully focused on the other cases that come across her desk. Particularly this one, the brutal rape and murder of a young yoga instructor whose body was left in a garbage dumpster.

The killer was extremely careful. No bodily fluids or fingerprints were left. The attack was unseen, in an area with no video surveillance. The victim was a newcomer to town with few if any local friends and no apparent connections with anyone who might have wished her harm. Kate’s team is stuck.

Then a second victim is found. This one a civilian employee of the police department. One of their own. Then another attack, one which the victim survives. The killer is escalating, perhaps getting sloppy, and clearly will not stop until he is stopped.

Carol Wyer’s protagonist is brilliantly written. Kate Young is driven, intense, a no-nonsense investigator committed to seeing justice done. She also carries on conversations with and sees images of her late husband. She is sane enough to know they are tricks of her mind. She is unwell enough to want them to continue. Visual and auditory hallucinations do not necessarily prevent people from engaging with the real world. They are not healthy, though, and over time can blur the lines between imagination and reality. This is particularly true when the hallucinations are of someone or something desirable, something you want, someone you miss. DI Young recognizes that her husband exists only in her memories and in her imagination. That doesn’t change the fact that she desperately wants to hold that connection tightly.

DI Young is a woman on the edge. She has no one she trusts enough to confide in. She has to excel in the cases that come before her, but she is compelled to investigate the case she should stay far away from. She is committed to the law and justice, but can you catch dirty cops without crawling in the mud yourself? I am eager to see where she goes next, propelled forward by shadows that refuse to let her go. Sanity may not be a luxury she can afford any time soon. 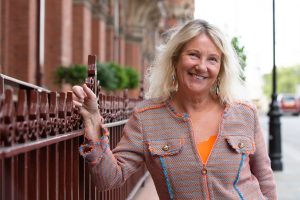 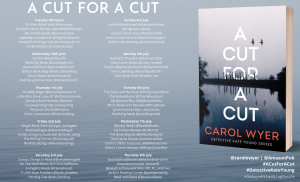 Our thanks to Emma Welton of Damp Pebbles Blog Tours for our copy of A Cut for a Cut, given solely in exchange for our honest review as part of this blog tour. The opinions here are those of Scintilla. For other perspectives, do check out the other bloggers participating in this tour.

Book Review: An Eye For An Eye, Carol Wyer

One thought on “Blog Tour: A Cut for a Cut, Carol Wyer”