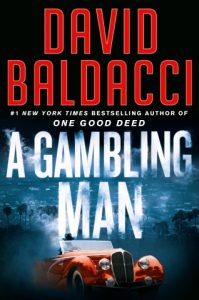 Aloysius Archer was instrumental in solving a major crime while on parole. Now that he is done, he has decided to become a private investigator. Following the recommendation of a friendly police detective, Archer heads west to California to learn from one of the best, retired FBI agent and “very private investigator” Willie Dash. A planned sleepover in Reno makes the last leg of the journey much more interesting. In Reno he wins a wad of cash, buys a gorgeous collector’s-edition Delahaye automobile, and meets a traveling companion: a showgirl wanting to go to Hollywood. Liberty Callahan is beautiful, sexy, talented, and can shoot straight. Each of those characteristics come in handy when they arrive in Bay Town.

Willie Dash spends a lot of time on very ordinary cases. Cheating spouses are a PI’s bread and butter. When a local mayoral candidate is accused of cheating with a local showgirl, the candidate hires Dash to prove his innocence and find out who is trying to frame him. This seems like the perfect case to begin his apprentice’s career on.

Until the murders begin.

One of the fun things about this series is the way David Baldacci has altered his writing style. Archer is a hard-boiled character. A veteran, a convicted felon (albeit one who did not do the crime he was accused of doing), a man who is good with his fists and great with the ladies. Baldacci writes this series with sort of a neo-noir voice. He evokes his inner Dashiell Hammett to tell a story set in the late 1940s about a man who seems to attract trouble with a sort of inescapable magnetism. Fortunately, this man is also quite good at dealing with trouble. And when he needs help, well, he fought in Europe for liberty and now he has Liberty with him to watch his back.

There are differences, though, between Archer and those classic noir detectives, differences that stem more from the times of the writers than from the times of the characters. Archer is not a racist nor a misogynist. He may enjoy looking at women but he values their minds and their characters as well. He is no prude, but neither does he use or abuse the women he meets. (OK, there is arguably one exception, but she did shoot first.) He treats people of color with dignity and respect. The fact that there are people of color in the book who are not criminals is itself a departure from the classic noir fiction.

A Gambling Man is a good bet to fill up a summer weekend of reading.