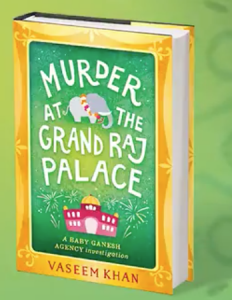 Some series draw me in because of their convoluted yet ultimately logical plots, their larger-than-life characters, their gritty realism, or other reasons that are far from my own experience. I have never encountered a murderer (that I know of) or found a murder victim. I have never knowingly been a pawn in an international conspiracy. The most impressive physical specimens I have met have been college athletes.

That is why the appeal of the Baby Ganesh Agency Investigations series is so very different. The protagonist is not a larger-than-life character. He is a middle-aged man. He has heart problems and takes pills every day to keep them in control. He is happily married to a very special woman who has been there with him for 25 years. Yes, he is a Mumbaiker. Yes, he is a retired police inspector turned private eye. Yes, he has a baby elephant. It’s easy to spot differences. But I can identify with this protagonist. Ashwin Chopra is a fine detective. More than that, he is a good man who loves his family, always tries (and usually succeeds) doing the right thing, and wants to make the world a better place. I am a little older, a little longer married, a little larger family, and my detective skills are relegated to finding where I’ve left my glasses the night before (trying to find glasses without wearing glasses is a problem at my age!). But I identify with this character, I identify with his ideals, and I want to see him (and Ganesh) succeed.

Murder at the Grand Raj Palace is the fourth of this series. As in most of the series there are two stories happening in parallel. The first is the titular crime. An American billionaire is found in his suite, stabbed through the heart. Senior officers want this to be a suicide, avoiding the uncomfortable political ramifications that a murder of an American in India’s most luxurious hotel would bring. One inspector believes there is more to it, so he calls on Chopra to help.

The second plot is more fun. Poppy Chopra wants a memorable 25th anniversary celebration. Since her husband is busy with his case, she decides to take rooms in the Grand Raj Palace so she can see him at night (and enjoy staying in a much fancier hotel than she had ever been in before). There she meets a young woman having second thoughts about her upcoming wedding. Except, this young woman is a princess, sole heir to one of the last remaining families from the Raj, and shortly after meeting Poppy, she disappears. So while Inspector Chopra (retd) is investigating a murder, Poppy Chopra enlists the aid of the extraordinary elephant Ganesh and her ward Irfan and looks for a missing princess.

One of the best aspects of this book is its inclusion of a fictional incident inspired by a terrible tragedy/crime. In December, 1984, poison escaped from an American chemical plant in Bhopal, India. Over half a million people were exposed to the gas. An uncertain number, probably between 4 and 8 thousand, were killed that night. Around 40,000 sustained permanent illness or injury. Union Carbide, the American owners of the plant, denied criminal responsibility. Although they paid millions in compensation, none of the American executives or managers were ever brought to trial in India as extradition was denied. A few Indians were convicted and given small sentences and fines. The area remains contaminated to this day.

The fictional incident included ties into the plot of the story, but saying how would give away spoilers. It does, though, remind those of us old enough to remember the tragedy of its horror. Families poisoned in their sleep, poisoned by the air coming in through their windows. Children and adults sickened, crippled, damaged. And an American chemical company much more concerned (apparently) with mitigating liability than with doing right by the victims.

Perhaps this is one final point of commonality between Chopra and people like me. Sometimes terrible things happen, things that are pointless and horrible and devastating. And, sometimes, there just is nothing that even a good man with a big heart can do to fix them.