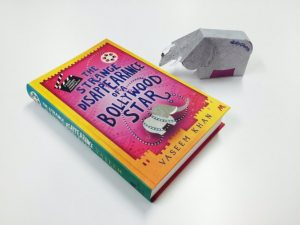 Many years ago the city of Mumbai shed its colonial name and embraced its position in a new and self-ruled India. The movie industry, though, held on to the first letter of the old name and created both a rival and an homage to the American cinematic center: Bollywood.

Inspector Ashwin Chopra (ret’d) is far too busy to engage in frivolities like concerts by Bollywood stars. Except his wife, Poppy, loves the cinema and loves l’enfant terrible Vicky Verma, a rising star. When Vicky Verma schedules a concert in Mumbai, in the arena where Chopra’s old friend and former colleague is in charge of security, Poppy insists that he ask his friend for tickets. In the front row. For Chopra, Poppy, their ward Irfan, and their companion elephant Ganesh.

Even in Mumbai, taking a baby elephant to a concert is unusual.

The next day, Chopra gets a call from Verma’s mother, herself a legendary Bollywood star. The young man has disappeared. And she wants Chopra to find him.

While Chopra is investigating the disappearance, his assistant Abbas Rangwalla is summoned to meet with the Queen of Mysore. She is the leader of the local group of eunuchs, transgender women who live in an otherwise abandoned building and survive in any way that they can. A devout Muslim who is also a retired police officer, Rangwalla appreciates the eunuchs as informants and defends their right to express themselves and live in peace. He is, though, personally uncomfortable with them. So when the Queen gives him a job accompanying a group of the women to a strange house to find out why they are being asked to perform for a reclusive rich patron, Rangwalla is forced to do things he never dreamed he would do. He shaves his beard. He puts on a sari. And he sings and dances (well, he tries) with the eunuchs as he tries to learn the truth.

In many mystery novels, including some in this series, we would eventually learn that these two cases are really two sides of a single case. But in this book, they are more two expressions of Indian cultures that are not overly familiar to western audiences. Most people have heard of Bollywood, especially the epic extravaganzas that are part song and dance musical, part stretchers of local customs and boundaries, and all colorful dramatic spectacles. Less well known is the type of corruption and vicious infighting and gangland involvement that would make for a gritty Hollywood Bollywood caper. “Eunuchs,” or transgender women as they are known in the United States, are also part of the Mumbai landscape. Fierce political and social debates over their rights to engage in the world as women are roiling my country. In India, they fill a niche as desired and despised outsiders. With no legal rights, victims of abuse and prejudice, they often survive as sex workers. Despite official and unofficial condemnation of their very lives, they are much in demand among a clientele with enough quiet support to keep them alive but not to allow them to live openly and freely.

Khan’s gift as a writer is seeing the unseen. Transgender women. Abandoned children. Physically damaged survivors. The poor. Sex workers. Prisoners. Accompanied by a small elephant and a large sense of purpose, his characters see them as well, and fight to find justice for all who call upon them.