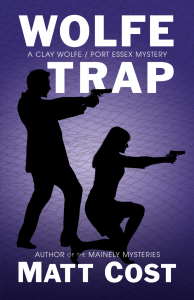 Clay Wolfe grew up in Port Essex, Maine. A beautiful seaside town, it is known for its lobster and other seafood, its beautiful view of the ocean, and the high school football team that won the Maine state championship. Wolfe was the quarterback of that team almost 20 years ago, but memories are long in small towns and retelling the stories is often good for a free beer.

Small town private detectives have quiet case loads. Cheating spouses. Abuse of workman’s comp cases. Occasional bodyguard duty for visiting celebrities. Nothing that could really get someone into trouble. Until a woman who had lived a very hard life hires him to find out who supplied the drugs that killed her infant granddaughter. Then fires him when he starts to find some answers. And people start dying. Violently.

Port Essex may be a small town but it has some big city issues, and those issues threaten to upend the life of one private detective.

Occasionally you will read the phrase, “Ripped from the Headlines,” telling you that a book or movie or TV show is telling a story that is inspired by the news of the day. That phrase could apply to Wolfe Trap. The US is in the midst of an opioid epidemic. Thousands of people are dying from addiction and overdoses on drugs like heroin and fentanyl and oxycontin. Both abuse of prescriptions and street drugs are contributing to this crisis and families all over the country are devastated by the consequences. Meanwhile, companies and investors who made these drugs and promoted their overuse have banked millions of dollars. Lawsuits and legal efforts are at work to redirect some of these profits from the drug companies to the victims of their product, but no compensation can restore a lost life.

Wolfe Trap tackles these issues. A dead child. A violent enforcer. Ordinary people making mistakes that predators use against them.

It also is a compelling story with interesting characters. One thing I particularly liked was the refusal to judge the victims. Wolfe himself is an alcoholic–and not the recovering kind involved in a 12-step program. His addiction may be perfectly legal but it is also very harmful and can lead to death. His family was personally touched by the drug crisis. Predators still roam the streets of our cities, but their victims deserve our support and not our condemnation. Matt Cost gets this. 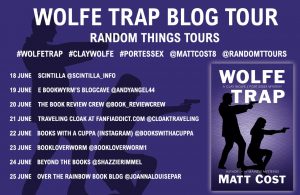 Our thanks to Anne Cater of Random Things Blog Tours for our PRINT copy of Wolfe Trap, given solely in exchange for our honest review. For other perspectives on this book check out the other bloggers on this tour. The opinions here are those of Scintilla. 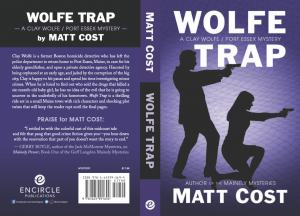