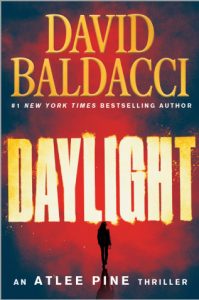 Atlee Pine got a bit sidetracked on her trip to find information about her sister. Having helped solve a major case, finding her biological father, and learning who kidnapped her sister, she has been given a little more time by her boss at the FBI to follow a few more leads. She and her friend and assistant Carol Blum head to New Jersey to find out why an ice cream salesman had decided to kidnap a little girl some twenty years ago.

Visiting the house where the kidnapper had once lived and where his grandson now lives, Pine hears him running out the back door. She pursues him on foot where she runs into an old friend.

Or rather, her old friend runs into her. John Puller, CID investigator for the Army, tackles Pine before he realizes who she is.

Fans of Baldacci will recognize Puller as the protagonist of another series of books by the author. Fans of Marvel movies could be wondering, as I am, whether he is setting up some kind of Avengers scenario, as two of his recent novels have paired characters from different series. I am a huge fan of crossovers but they are much more common on TV and movies than they are in books. Still, I am here for all of the Pine and Puller I can get.

Puller has been investigating a drug ring supplying soldiers at Fort Dix. Pine offers to help with the investigation since she had inadvertently messed up their stakeout. But they quickly learn that the stakes are higher than they could have imagined when Puller’s aide is murdered and a young boy holding a gun is then shot by a responding policeman. The two investigators find that a much deeper and darker plot is behind the drugs, one involving high ranking politicians, underage prostitution, blackmail and extortion, and a casual disregard for human life.

Some authors take their characters around the world or around the country in a single book. Baldacci can certainly do that, but most of the action here takes place in a small area of the American East Coast, the power corridor between Washington D.C. and New York City. Dirty money and dirty politics may be the stuff of headlines, but it is also the stuff of an exciting thriller, one that does not disappoint.

Atlee Pine is a sharp investigator, a tough fighter, and a faithful friend. Lie to her, though, and she is relentless in her pursuit. And nothing will stand between her and finding out what happened to her twin sister–though the occasional high stakes investigation may delay her from time to time.